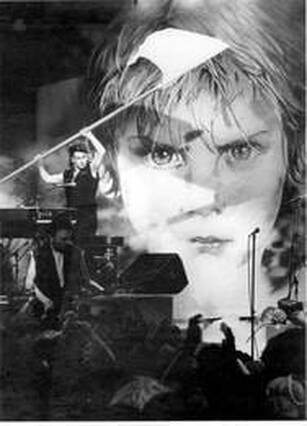 Well before Bono started running around the stage waving the white flag of peace and singing “Sunday Bloody Sunday,” a band from Belfast called Stiff Little Fingers was living through The Troubles first hand. After changing their name from Highway Star (after a Deep Purple song) to something more appropriate (after a Vibrator’s song of the same name) to the burgeoning punk scene, the band befriended a Marxist journalist from the Daily Express named Gordon Ogilvie. Ogilvie encouraged the band to play material based on life in war-torn Nothern Ireland, and offered to help with the lyrics — most of which were extremely critical of the way paramilitary and government organizations exploited and ruined the lives of ordinary people, particularly the young.

A taut, explosive punk band, Stiff Little Fingers was often referred to as “The Irish Clash.” I translate that to mean: punk music with a melody and a message. Which is pretty amazing in light of lead singer Jake Burns’ voice (which, like Richard Butler of the Psychedelic Furs could only be cultivated by smoking three packs of cigarettes a day and gargling with a bottle of Paddy every morning), a blitzkrieg guitar attack that seldom strayed past three chords, and a pounding beat designed to instill instant pogo-frenzy in the mosh pit.

During my junior year abroad I tried to see SLF on several occasions; once in Bristol and once in Exeter, but neither time panned out. I did, however, successfully go out of my way to visit the city that they sang about with such vitriol and fury — much to my British friend’s consternation and protests on behalf of my welfare. Despite the potential danger, I just had to see Belfast for myself — partially out of some perverse sense of curiosity, and definitely because of the music that managed to escape through the checkpoints and razor wire. It was also en route to the ferry that would take me from Northern Ireland to the west coast of Scotland so I could be in Edinburgh for one of the most amazing New Year’s eve celebrations I have ever experienced. But before that story could unfold… the one about my visit to Belfast had to be written… 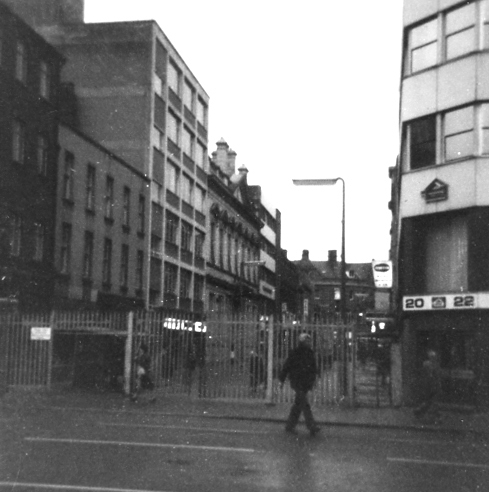 One way in and one way out… Belfast City - December, 1980
“What the hell is that,” I asked, pointing at the flood of white lights, and miles of fence topped with shiny razor wire.

“D'ats da Maze,” answered my new friend Paul as he shifted his truck down through about ten gears.

“The what?” I asked, struggling with the thick northern Irish accent.

Indeed I had. In 1980 there were few people in Ireland and the UK who had not heard of the famed hunger striker and the horrendous H-Block section of the Maze prison where Sands and other IRA members were incarcerated. Seeing it however, on a cold December night from the high, front seat of a semi bound for Belfast, was quite different. Then again, Belfast itself was also quite different — unlike any city I had ever seen.

I wasn't quite sure why I was going to Belfast. I suppose a perverse sense of curiosity was partially responsible. It was also en route to the ferry that would take me to Scotland for New Years. Other than that, I guess I just wanted to go just to say I had gone…

“Technically I'm not supposed to be bringing any hitch hikers into the city,” Paul said glancing over at me. “But Jaysus you look like you've lived here all your life so I s'pose it's alright. Just let me do the talking is all I ask.”

​Fine by me. I wasn't looking for trouble — just hoping to find somewhere warm to spend the night. Belfast was Dublin's darker, dangerous relative and the prospects of spending another night sleeping outside had me spooked.

The semi slowly lumbered toward the toll plaza-like checkpoint where armed British soldiers were milling about and either waving vehicles through or pointing them over to the side of the road for further inspection. Paul and his truck were given the nod and we drove into the city which was lit-up and fenced-in as far as the eye could see: like one giant prison yard — not too dissimilar from Capitol Hill these days. Paul smiled, and tipped his cap to the soldier standing on the side of the road in full kit. As soon as we drove  out of earshot I could hear him mutter “fucker” under his breath. 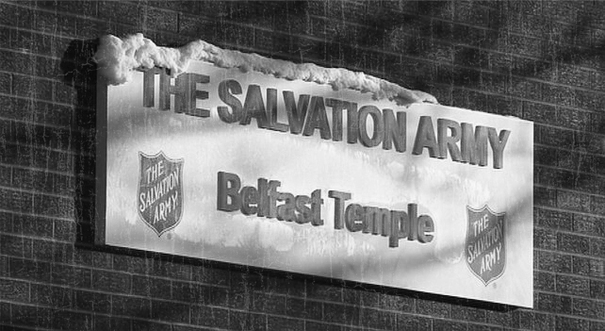 The Belfast Salvation Army where I spent a restful night.
The chap in charge of the Salvation Army was an amicable fellow named Archie. He was as surprised to see me standing on his doorstep as I was glad to see his smiling face open the door. I was even happier to learn he had room for one more wayward traveller that evening. I stowed my backpack and then, much to Archie's amazement, headed back out the door and onto the street. I needed a pint. Badly. Plus I wanted to explore the city a little by night. I got about halfway down the street when somewhere nearby a car backfired. I quickly learned that in Belfast, nobody takes any chances. Ahead of me, two people dove into a storefront doorway when they heard the sound. I suddenly found myself alone on the sidewalk — still looking for a nightcap. “What are ye doing?” a voiced hissed at me as I continued up the street. “Looking for a pub,” I shot back (I still hadn't put two and two together). “Get off the street before ya get yerself killed,” the voice from the shadow warned. “What are you talking about,” I said, stopping and stepping towards the darkened doorway. A hand shot out and pulled me into the safety of the shadows. “It's after curfew. Didja not hear the gunshot, sonny?” a middle aged man—who looked like he probably knew where I could get a pint or two—said to me. “That was a car backfiring, not a gunshot,” I informed him. “So sez you,” he retorted, and pushed(!) me out of the doorway and back onto the street. Maybe the pint could wait until tomorrow…
My plan for the morning was some early sightseeing before the city got too crowded and then I needed to be heading north to the Port of Larne where I would catch a ferry to Scotland. So off I went. Just me, my army fatigue jacket, and an instamatic camera; snapping away at every image of occupation and repression I could find. Now, a sensible person would have spotted the problem with this picture right away. I, on the other hand, didn't realize there was a problem, until I accidentally passed through one checkpoint three times in the same hour and earned myself the attention of two enthusiastic young British soldiers. "Oi!" I heard someone shout from behind me. I turned around to face the two uniforms, guns leveled, boots pounding, running straight at me. “What the fu—?” Before I could even finish vocalizing my astonishment they surrounded me and began a rapid fire interrogation. 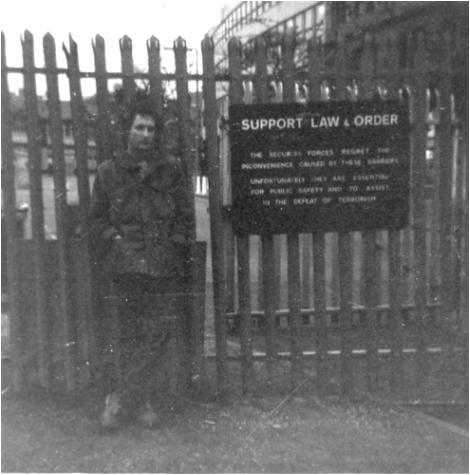 Looking for Troubles - Belfast, December 1980
None of my answers were satisfactory...
“What's yer name?”
“John Collins.”
“Full name?”
“Do you mean my middle name too?”
“That would be your full name.”
“John Michael Collins.”
Raised eyebrows.
“Passport!”
Oops!
“Where's yer bloody passport, mate?”
“I don't have it with me.”
“Well, where the fuck is it?”
Starting to get annoyed myself…
“Back at the Salvation Army where I spent the night.”
“You spent the night at the Salvation Army?”
“Yes.”
“What were ye doing there?”
“Sleeping.”
“Get in the fucking truck.”

The two soldiers hustled me into the back of a nearby jeep and informed me their captain would like to have a word. We drove a few blocks to what looked like some kind of military command center.

“What's yer name?"
“John Collins.”
“Full name?”
“Do you mean my middle name too?”
“That would be your full name.”
“John Michael Collins.”
Raised eyebrows.
“What are ye doing here?”
“Sightseeing.”
“Sightseeing? Are ye bloody mad?”
Incredulous.
“Yes. Sightseeing - not mad.”
“Passport!”
Oops.
“Where's yer bloody passport, mate?”
“I don't have it with me.”
“Well, where the fuck is it?”
Starting to really get annoyed myself…
“Back at the Salvation Army where I spent the night.”
“You spent the night at the Salvation Army?”
“Yes.”
“And now yer out walking about town, happy as ye please, without any identification?”
“Yeah. Sorry about that.”
“You don't know the half of it. Here's what yer gonna do for me Mr. John Michael Collins. Yer gonna trot on back to that Salvation Army, get your passport and bring it right back here to me. Understand?”

I understood. So I trotted on back to the Salvation Army. Got my backpack. And promptly hitch hiked the hell out of town. Somewhere in Belfast an obnoxious British captain awaits my return. 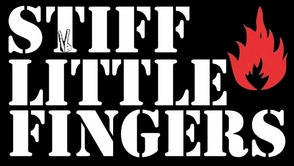 Today's Happy Medium Song of the Day features a band from Belfast. There is nothing Irish per-se about their music. But the songs themselves were heavily steeped in the violence and the sadness and the urgent need for a different way of life that permeated Northern Ireland, and what it meant to be a kid growing up in such conditions. Some regarded Stiff Little Fingers as little more than “narrow-minded sloganeers,” but for me, they offered rare insight with a raw edged melody. “Alternative Ulster” comes from their debut album Inflammable Material, which also happened to be the first LP ever released on the famous Rough Trade record label. and the first independent album to chart in the UK music charts, where it reached number 14. It’s a two and a half minute musical call-to-arms that may have become out-dated thanks to the relative peace that now prevails, but it still sends an adrenaline rush through my body every time I hear the opening guitar chords. It’s also nearly incomprehensible without a lyric sheet, so… (Please use the comments box to share your thoughts.)