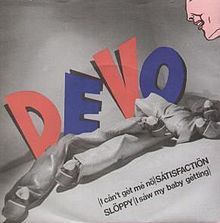 Devo's second single.
In 1978, a strange new band from Akron, Ohio was told that if they wanted to include a cover of the Rolling Stones classic, “Satisfaction” on their debut album, they needed to get permission from the Man himself. It’s unclear why Warner Brothers imposed this stipulation. Devo had already released the song as a single in 1977 on their own Booji Boy records and there had been no negative repercussions. Typically cover songs don’t require anyone’s approval as long as the original copyright holder gets paid and no one changes any of the words. Maybe label execs at Warners were worried that this particular cover was so different that it might be regarded as satire—a separate legal entity for which one does need permission. Maybe someone at Warner Brothers had a gut feeling that this particular cover might be controversial and it was better to get permission than ask for forgiveness while being sued by the greatest rock n' roll band in the world.
At the meeting, “Mark Mothersbaugh put the tape in a boom box and pressed ‘play.’ As the sounds of the cover filled the room, Jagger sat stone-faced. What he was hearing didn’t sound much like the “Satisfaction” he’d written. Keith Richards’s iconic riff was gone, and the original melody was nowhere to be found. Was this a homage, Mick must have wondered, or were they mocking him? “He was just looking down at the floor swirling his glass of red wine,” Devo’s bass player Gerald Casale recently remembered, adding, “He didn’t even have shoes on, just socks and some velour pants. I don’t know what his habits were then, but this was early afternoon and it looked like he had just gotten up.” 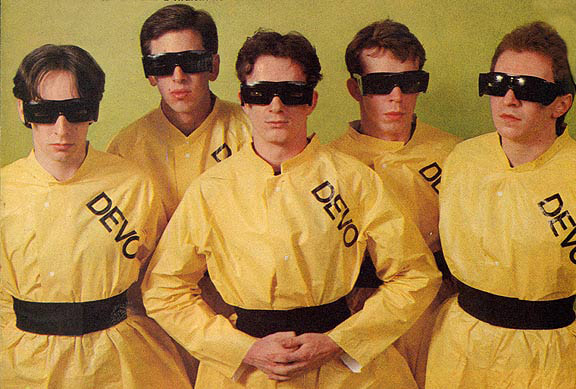 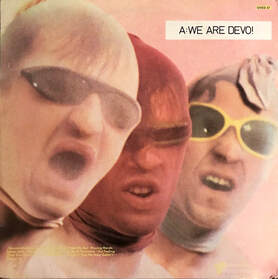 Virgin Records release.
The first time I heard Devo’s mutated, anxiety-riddled riff on the classic Rolling Stones song I wasn't swirling a glass of red wine, but I remember thinking, “Is this punk or is this the sound of sacrilege?” Conversion was instantaneous after a few spins at 45 revolutions per minute, and I completely embraced the native Ohio group David Bowie once introduced on stage in 1977 as “the band of the future.” But Devo was more brand​ then band; more like a quirky concept complete with a corporate anthem, uniforms, and a bizarre mission statement augmented by a super-8 campaign of wacky musical performances and strangely dystopian mockumentaries. When the album finally came out, I eagerly pledged “duty now for the future,” and swung by the local Record Theatre store to pick up Q: Are We Not Men? A: We Are Devo. For some reason the only copies available were British imports on the Virgin record label pressed on a funky, marbled-grey vinyl. Could things get any stranger than paying import prices for a record by a band from Akron?  As soon as I dropped the needle on the record the answer was a resounding "Yes! Of course things could get stranger." To say I had never heard anything quite like Devo would be an understatement. To say I loved "the sound of things falling apart," would be an oversimplification, but as I prepared to leave for my freshman year at Kenyon College I played that record over and over. The music was strangely contagious. The timing was perfect.
For thirty seconds or so, the men sat in silence, listening to the weird robo-funk coming from the boom box. Then something changed. “He suddenly stood up and started dancing around on this Afghan rug in front of the fireplace,” Casale said, of Jagger, “the sort of rooster-man dance he used to do, and saying”—he impersonated Jagger’s accent—“‘I like it, I like it.’ Mark and I lit up, big smiles on our faces, like in ‘Wayne’s World’: ‘We’re not worthy!’ To see your icon that you grew up admiring, that you had seen in concert, dancing around like Mick Jagger being Mick Jagger. It was unbelievable.”

​I’m sure it was “unbelievable.” Who knew Jagger could be even cooler?
Ray Padgett’s article in Rolling Stone — “The Story Behind Devo’s Iconic Cover of the Rolling Stones’ “Satisfaction”— documents the interesting evolution, or de-evolution, of an iconic rock classic by the spud boys from Akron:

One January afternoon in 1977,  Jerry Casale’s brother Bob came up with a guitar line, the robotic seven-note opening that would replace the original “Satisfaction” riff. The drummer Alan Myers joined in with a typically bizarre Devo beat. “It sounded like some kind of mutated devolved reggae,” Casale said, of the rhythm. “I started laughing, and I came up with a bass part that I thought was a conceptual reggae part. We just kept playing it, and Mark just started singing.” The song Mothersbaugh sang wasn’t “Satisfaction” but “Paint It Black.” (Mothersbaugh was a huge Stones fan.) But, as the band futzed around, they couldn’t get the lyrics to match their jerky rhythm. Then, Casale recalled, “Mark started singing ‘(I Can’t Get No) Satisfaction’ to our jam, and that did it.”

The band soon realized that “Satisfaction” offered an ideal vehicle to bring their de-evolution philosophy to the masses. They weren’t covering the song, they would say; they were “correcting” it. “I think those are some of the most amazing lyrics that were ever written in rock and roll,” Mothersbaugh said, “dealing with conspicuous consumption and the stupidity of capitalism and sexual frustration all in one song. It pretty much encapsulated what was going on with kids at that time, much more than any of the hippie songs, as far as I was concerned.”

The more Devo played the song, the more it evolved—or devolved. Early videos show a version much slower than it would become—a mid-tempo rumble that wore out its welcome by the end. It was interesting conceptually, and no doubt a fun surprise for concertgoers, but not necessarily something you’d want to listen to repeatedly. “The versions that we were doing of all our songs in the early days were very slow and more bluesy, like Captain Beefheart material,” Mothersbaugh recalled. 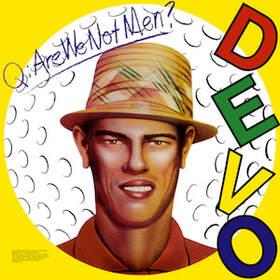 Warner Brother Records release.
It was Brian Eno who stepped in to liven up the production and and helped transform the “Captain Beefheart-like material” into the jittery, somewhat more viable, Akron assembly line-remake that is now almost impossible (for me) to disassociate from the original. Apparently the recording sessions were a little contentious because Devo had a pretty good idea about how they wanted everything to sound, and Eno had a pretty good idea of what was needed to make everything sound better. Despite what went on behind the scenes, "the sound of things falling apart" sounded fantastic to me, and unlike any other music that had ever come out of Ohio before. I suppose a case could be made for Cleveland’s Pere Ubu, who's music shared a similar industrial (wasteland) overlay, but didn't have the same appealing tongue-in-cheek humor. Devo's debut quickly became one of my all-time favorite albums, and much to the dismay of some of my new dorm mates it was in “heavy rotation” on my turntable throughout the first few months of our freshman year.

When the infamous Phi Kap fraternity Halloween party rolled around the last weekend in October, my new college friends and I were ready. That generous first prize bottle of Jack Daniels for best costume was as good as ours! We had cobbled our costumes together from a shopping spree at the Big Bear—but more importantly, we had an award-winning slogan that we were prepared to proclaim non-stop all night long—complete with synchronized robotic dance moves—in a concerted effort to attract more devo-tees.
“Are we not men?
We are Devo?
Are we not men?
D-E-V-O!
We must repeat.
OK, let’s go!” 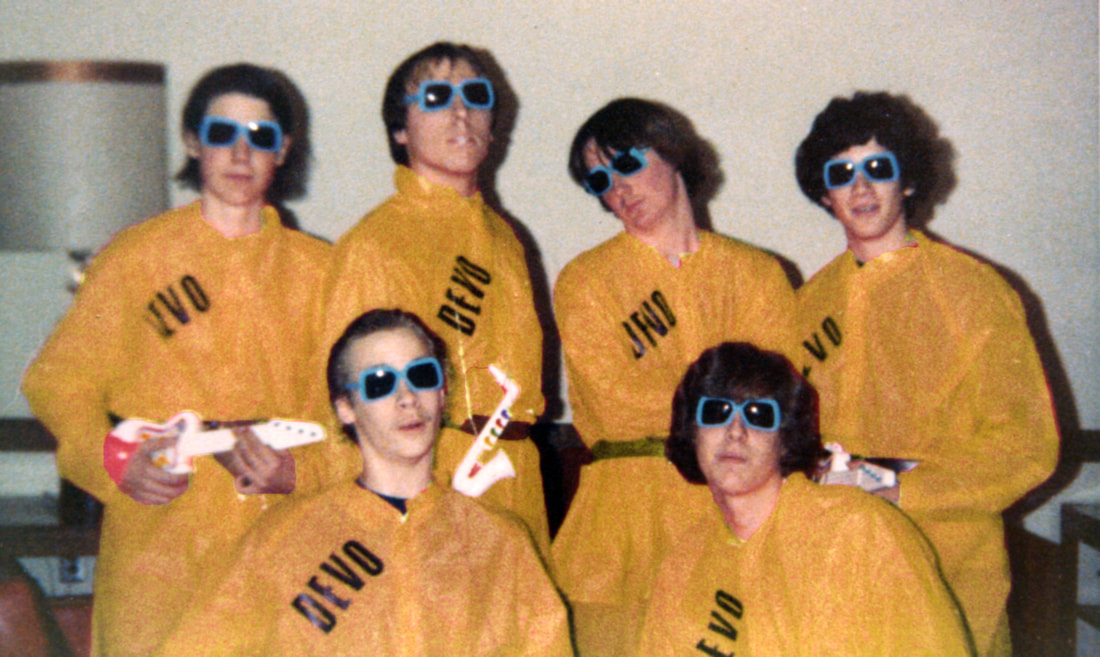 We're ALL Devo!
Yep! We won the bottle, although it may have been “awarded” just to shut us up. “If they’re drinking, they’re not singing,” I overheard one of the upperclass Phi Kaps say, shaking his head. And that was true, of course, until the bottle was empty… And we were asked to leave.
Three days after the party, sans my costume and hangover, I met my friend George in front of the Akron Civic Theatre. Over the years George had done his best to instill me with a sense of culture; taking me to see the Cleveland Orchestra, the Great Lakes Shakespeare Festival, and countless historic and influential films. It was only fair that I should return the favor and treat him to Devo's sold-out Homecoming Concert on Halloween. I don't know what he thought when the lights went down and the show began with all five members of the band wriggling their way out from underneath the heavy, black plastic that covered the entire floor of the stage, but following their short film entitled "In the Beginning Was the End: The Truth About De Evolution," I don't think there was any other way they could take to the stage that night. Perhaps the experience wasn't on par with the Orchestra performing Stravinsky's "Firebird," at Severance Hall, but it had to be a close second. 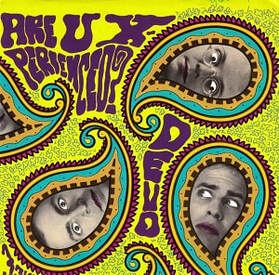 Over the years, Devo has “corrected” a number of other artist’s songs: “Secret Agent Man” by Johnny Rivers; “Ohio” by Crosby, Stills, Nash and Young; “Working in the Coal Mine” by Lee Dorsey and “Don’t be Cruel” by Otis Blackwell, to name a few. Each cover offers a satisfyingly unique variation of the original. In 1984 they released their sixth album, Shout! The first single off the album was a thumping, psychedelically synthesized cover of “Are You Experienced?” by The Jimi Hendrix Experience. Most of the songs on Shout! rely heavily on the Fairlight CMI digital sampling synthesizer because at the time, Mothersbaugh and Casale were convinced the guitar had become obsolete and intended to use the new album to prove it. It's not so ironic Devo chose to cover an incomparable guitar virtuoso’s song on this album. When you listen to the original song and the rest of the album it's taken from, Hendrix is essentially making the same point about the instrument and the way it had been played up until then. In Jimi's hands, the guitar, and rock music itself, was transformed (literally turned backwards and upside down)—Devo would say, “mutated”—into something unusual and beautiful. In Devo's hands, "Are You Experienced" is a quirky homage I'd like to think Jimi would have appreciated and approved with the same knowing grin that Mick eventually flashed at that meeting back in 1978. Likewise, I hope you will be satisfied experiencing it here, on the Happy Medium Song of the Day. It's Friday… I think. Enjoy the weekend.
(Please use the comments box below to share your thoughts.)