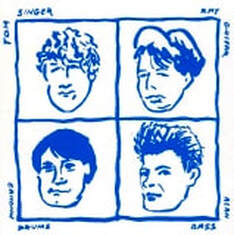 So you know how good it feels to find an old t-shirt, that you thought was gone, buried in the bottom of your drawer? And you put that shirt on and it feels so comfortable… soft and worn… not too tight… not too baggy… not too long… not too short… faded, but not dated… Well, that's how I feel about today's song. Heading out the door at 5:30am this morning I grabbed for a disc in the semi-darkness of the living room and ended up with Been There, Seen That, Done That by Something Happens! a Dublin quartet that was kicking around in the 80's.  A terrific debut single brought this band to my attention, and on the strength of the subsequent debut LP I tried to drum up interest amongst my concert-going friends to see them one night at the old 9:30 Club. The weather was lousy, Something Happens! were the first of three bands on the bill, and the other two bands were of no interest to anyone… including myself. Sounds like an early night, right? Not if you manage to convince the management that you're a close friend of the band and it's really important to deliver them a case of Guinness to help them get over any homesickness for Dublin they might be feeling… Despite a captive audience of only seven people (including myself and the camera woman up in the video crow's nest on the center pole) the band performed a blistering 40-minute set — determined to entertain no matter what. Afterwards we polished off the stout, I helped them load their van in the rain, and they drove off into the night splashing through the puddle-pocked streets of Washington. 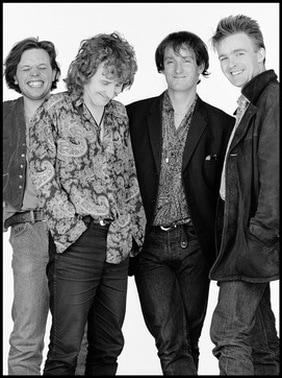 Something Happens!
With each release it became more and more difficult to track down their albums in the US, until eventually, without the help of the internet, I was dead in the water after Bedlam A-Go-Go. Soon after, they lost their American distributor, and I lost track. And yet, just like that comfy t-shirt that you dig out from the bottom of the pile, their debut recording sounded so good this morning I just had to pop the sun roof and share it with the Bethesda neighborhoods I drive through on my way to work. The Happy Medium Song of the Day is “Beach” by Something Happens!
(Please use the comments box to share your thoughts.)