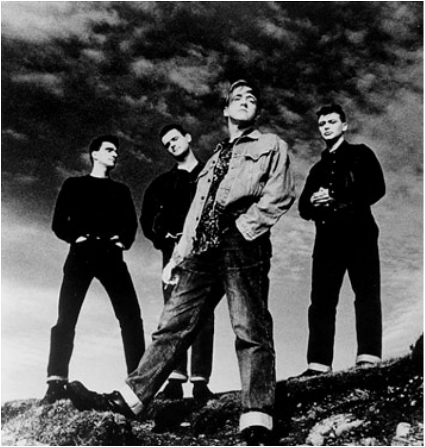 A House
Sometimes life just isn't fair, and my music collection is an enormous alphabetized testament to that fact… The first song on the first CD on the first shelf in my collection comes from one of the most unjustly overlooked Irish bands to ever be overshadowed by fellow Dubliners, U2.

It's an Irish band very few people have ever heard. I say that, not to brag, but because I am (naively, I'll admit) amazed that a band so consistently clever, catchy, well produced, and prolific (I own 5 CD's, 7 CD-singles and 3 45's by them) is, and was, so invisible outside their own country.  Amazement turns to incredulity and disappointment when I listen to the music and find it just as vital now as when I first bought it eighteen years ago. Of course this a purely subjective observation, but it still doesn't stop me from “rescuing” the disc every time I stumble across it in a used CD store, and giving it to someone as a gift. Maybe I can stop doing that now…

I remember the first time I heard this song and the rest of the tunes from A House’s debut album: On Our Big Fat Merry-go-Round… I couldn’t believe there wasn’t a bigger buzz. I felt like I had just discovered a big bag of money laying in the middle of the road that every one had just passed by without taking the time to look inside. Maybe it was the band’s name (uh•house or ã•house?) Maybe it was their tiny independent label (Blanco y Negro). Or maybe there just wasn’t any buzz left for another band from Ireland in 1988. Keep in mind, U2 had just released The Joshua Tree the year before and followed it up in ’88 with a major studio feature film and a double album called Rattle and Hum. A well-deserved spotlight was focused on them and no one else in Ireland; north or south, could barely get a sound-check. I thought I was really on to something—long before anyone else had caught on—and it was only a matter of time before A House became hugely popular. But popularity and success never really came. Despite five wildly entertaining albums, a slew of catchy singles and ep’s, and the fervor they eventually cultivated in the Irish press and public, the band broke up after ten years of living in the shadow of the giant. Lead singer/song-writer Dave Couse (rhymes with house) has forged an interesting solo career for himself over the years since his band’s demise. I’ve even corresponded with him regarding the possibility of a back yard show on Druid Drive… Stranger things have happened.

Today's Happy Medium Song of the Day is “Call me Blue” by A House. Call me blue — just don't call me late for dinner… (Please use the comments box to share your thoughts.)