Happy Medium Productions
I never owned any records by the band Chicago, even though they were enormously successful and popular throughout the '70's when I was a teenager. Maybe I was turned off by their enormous popularity. Maybe I was put off because they couldn't come up with anything more imaginative for their record titles than II, III, V, etc. Still, every once in a while there was the odd single that caught my ear and I'd go running for the tape recorder… Enjoying the band as a teen was a tricky proposition too, because they were liked by too many adults to be regarded as “dangerous,” rock n' roll. All those horns, and efforts to merge jazz and blues and pop. But this song kicks off with a dirty, Robin Trower, “Simple Sister”-like, overdriven guitar riff first, and then the horns come blasting in. I remember being reluctant to admit that I liked the song when it came out in 1970… and I'm a little embarrassed to say that I still like it now… but only a little… embarrassed, that is. The Happy Medium Song of the Day is “25 or 6 to 4” by Chicago and it comes with a little tid-bit of information from the folks who write The Straight Dope. I hope you enjoy this blast from the past.

﻿﻿﻿"The song “25 or 6 to 4” appeared on Chicago II and was written by organist/vocalist Robert Lamm. The title and lyrics have puzzled many since it appeared in 1970. Some say it's a drug reference, suggesting a unit of measurement involving the quantity of joints that can be rolled from a what-used-to-be dime bag. Some feel it's about looking for spiritual revelation, undergoing a mysterious soul-searching journey.

Perhaps you're too young to recall that in the late '60s and '70s it was a popular parlour game—if not quite an intellectual pursuit—to read hidden messages and double meanings into song lyrics. Many people thought “Hey Jude” was about shooting heroin. Just about everything Bob Dylan wrote went through hours of scrutiny by his fans. Did you ever check into the “Hotel California” by the Eagles? Many of the Rolling Stones songs were supposedly about drugs, though it's hard to ignore the more explicit meanings (“You make a dead man come.”) What about “I Am the Walrus,” which was supposedly written on an acid trip about Paul McCartney's greatly exaggerated and rumored demise? Goo goo goo joob, baby.﻿﻿﻿ 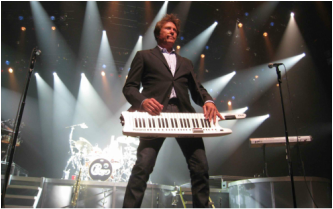 Gotta love a keytar!
Lamm says it's simpler than that. “The song is about writing a song. It's not mystical,” he says. Take a look at some of the lyrics:

​Waiting for the break of day — He's been up all night and now it's getting close to sunrise.

Searching for something to say — Trying to think of song lyrics.

Giving up I close my eyes – He's exhausted and his eyes hurt from being open too long, so he closes them.

Staring blindly into space – This expression is often on the faces of writers and reporters. Trust me.

Getting up to splash my face — Something you do when you're trying to stay awake, though a good cup of Starbuck's does wonders for me.

Wanting just to stay awake, wondering how much I can take — How far can he push himself to get the song done?