The Windy City
I dropped Lori off at the metro yesterday so she could catch a 2:30 flight to Chicago. After various delays and a long, unscheduled detour through beautiful Newark, NJ she finally arrived in Chicago at 12:30 last night! I don't know much, but I think when it takes less time to drive from Washington to Chicago, and it still costs twice as much to fly, something is seriously out of whack. Speaking of out of whack… it occurs to me that the last time I was in Chicago, coincidentally, was to film voter turn out at the polls for the 2000 Presidential election. Nothing like going to bed in confidence after a hard day's work and waking up in the middle of the night to your worst nightmare… But seriously, I like Chicago. I've always had a good time whenever I've been there… 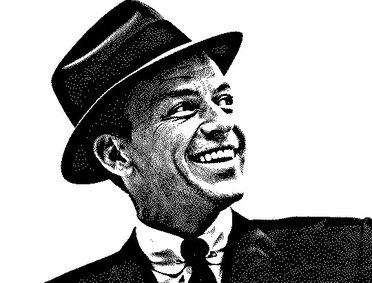 Frank Sinatra
When I was a kid, before I really knew anything about music, I listened to the records my parents played on their stereo: namely Johnny Cash, Johnny Mathis, broadway musicals, movie soundtracks and, of course, Frank Sinatra. Back then, stereos weren't though of as “electronics,” they were regarded as furniture; credenza's with a turntable and radio, a low sideboard with speakers where you could display your Hummels and photo frames. My parents' stereo certainly fit into this category. It was 7 feet of high polished wood with two 15” speakers at either end. There was a lid in the center which lifted up like the hood of a car, and inside was a turntable that allowed you to stack up to ten LP's, a radio tuner with knobs as big as door handles, and a slot for storing about twenty of your most frequently played albums. It was probably this very storage capability that allowed it to be sold in furniture stores rather than an appliance or stereo store. The tone arm was the size of a small garden tool and weighed as much. Over the years, the hinges on the lid became weak from use and could no longer hold the lid open on their own. This made cuing up a record rather tricky, and inevitably the first track on most of my parent's records eventually developed a skip because as soon as the needle hit the vinyl, the lid would slam shut with a bang causing it to jump halfway across track 1. When it came to volume on the stereo, my father only knew two settings: “loud” and “really loud.” “Loud” meant there was no escape on the entire first floor from Sgt. Barry Sadler singing the “Ballad of the Green Berets.” “Really Loud” meant there was no escaping Glen Campbell in our bedrooms on the second floor, in the basement or even across the street at my friend Donny Bianchi's house. “Loud Music” really only happened on certain holidays that got my father's patriotism revved up. “Really Loud” music seemed to be the requisite soundtrack for cooking brunch after the 10:15 Sunday Mass.

I wasn't allowed to touch the stereo… hell, technically I wasn't even allowed in the room where the stereo resided because no kids were ever allowed in the living room. But if the music wasn't too loud, sometimes I would lay on the floor in front of one of the big speakers, listen to the songs and wonder what it would be like to ski down the sunbeam of light that shone through the small window on our front door and angled it's way down to the carpet where I lay… Long after the stereo stopped working, and my father stopped cooking Sunday brunch, my mom encouraged me to take whatever records I wanted for my own collection. I absconded with Frank and Petulia and all the James Bond soundtracks. Alas, no Sgt. Barry or Glen Campbell.

So this Happy Medium Song of the Day kicks of my week-long tribute to the windy city and oddly enough it's performed by the kid from Hoboken who most people associate with New York. “Chicago”is from one of my favorite Sinatra albums, Forever Frank (but can also be found on his compilation of travel themed songs, Come Fly With Me). Somewhere there's a great picture of my father and I wearing similar suits, skinny ties and dress felt hats like the kind Frank is wearing on the cover — presumably getting ready for church so we could then come home and blast Roger Miller really loud while cooking up a batch of the best scrambled eggs in Ohio…
(Please use the comments box to share your thoughts.)