Happy Medium Productions
No question about it… the way my mind works is God's own sweet mystery… Every day on my way to and from work, I pass a street called Valerian Court. Every time I pass it, I think of my 9th grade Algebra teacher whose name was Amerigo Valerian, although he was known to everybody as “Mitty.” Mitty Valerian was a short, stocky Italian with snow white hair and a swaggering walk. His gnarled, arthritic, sport-scared fingers and navy blue suit jacket were forever coated in chalk dust. Unlike his Geometry counter-part—Mr. Smith, or “Smitty” (who once spun around from the chalkboard and pegged a kid all the way in the back of the room with one of those big wooden chalk protractors for talking in class behind his back)—Mitty Valerian was kind, lovable and never seemed happier than when he was standing in front of a classroom talking about either football or math. That man did everything he could to teach me Algebra and help me earn a passing grade — even though the notion of multiplying two letters so I can then subtract the sum of those two letters to find out what the true value of an unknown letter is… makes as little sense to me now as it did back in 1974. I'll use my letters to spell words, thank you very much…

Speaking of which… the great thing about Mitty Valerian—and probably the real reason I managed to pass Algebra—was that he told great stories as often and as well as he taught math. Nobody knew if they were bullshit or not, but they were always funny, they always took up valuable class time, and they always attempted to convey some kind of ridulous life-lesson. One of my favorites involved Mitty painting the side of his house high up on a ladder. Stretching to reach an out-of-the-way spot, the ladder suddenly started to fall away from the side of the house. “As I was falling 20ft (this number fluctuated like my Algebra grade) to the ground,” Mitty calmly recounted, “I thought two things to myself (personally, I probably would have only been able to manage one thought: “Oh shit! Here comes the ground!”) “I could ride that baby all the way to the ground and just take my lumps like a man or I'll ride it down half way and then I'll just jump off.” Apparently Mitty had opted for the latter and came away with barely a scratch. When the credibility of his story was called into question, he was happy to clamber up onto a chair and from there, his desk, to demonstrate his dexterous and almost balletic backwards dismount from the falling ladder. The other story was more of a “life-lesson” and it simply warned us that we should never go into a stall in a public bathroom without first checking to make sure that the stall was adequately stocked with toilet paper. I have silently thanked my Algebra teacher again and again in more public rest rooms than you can ever imagine. So I guess I shouldn't be too down on Algebra — Mitty Valerian's class actually did teach me a thing or two that I still find useful to this day. 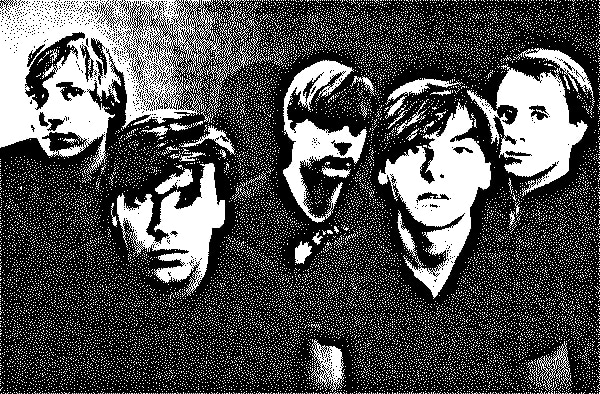 New Math
And so here, in a very roundabout way—via Valerian Court and Mitty Valerian's Algebra class, is New Math, a five-man band from Rochester, New York who released an EP and an album's worth of material between 1979 and 1984. Without undergoing any personnel changes, the band later became the Jet Black Berries and released three more albums of note—one of them an offbeat, science fiction/western concept album—before disbanding in 1988. The Happy Medium Song of the Day, I believe, was a single that didn't appear on either the EP or the LP by New Math and it's called “Die Trying.” The sound quality on this particular 45rpm recording isn't the best, but the brilliance of the song far outshines its technical shortcomings... so says me. (Please use the comments box to share your thoughts.)