﻿All this talk about the demise of record labels, plummeting CD sales, boarded up record stores and the end of listening to music as we know it… Fingers are being pointed everywhere. But you know what I think? I don’t think lackluster music sales can be blamed on Steve Jobs/the iPod/or the Apple iTunes Store. I don’t think it can be blamed on LimeWire and other peer-to-peer sharing software. And I don’t think it can be blamed on the complete lack of radio support. Nope. I think one single thing is responsible for the disappointing disappearance of the disc — insanely ridiculous and totally unnecessary packaging. I’m referring specifically to that sticky strip of plastic that binds the two top halves of the CD jewel case together. You know, the one that is underneath the shrink wrap? The one that breaks apart into a million sticky little pieces when you try to peel it off? The one that leaves a sticky residue on your brand new purchase? That one. Could music companies have made it any more difficult to unwrap and play the music? Shit. In the days of vinyl, one slash of a fingernail, a car key, or even a dime could slit the shrink wrap on an LP like a Ginsu letter opener and within seconds the record could be spinning on the turntable. And nobody ever made the sacrilegious mistake of putting a sticker directly on the record cover itself — unless it was part of the actual design! (yes, I have Undercover by the Rolling Stones on vinyl too). If the traditional retail music industry tanks it won’t be the result of piracy and illegal downloading. It won’t be because the consumer got fed up with paying the same price for a single CD as they pay for a spindle of 100 blank CD’s. And it won’t be because there’s nowhere to go and buy CD’s that doesn’t involve shipping charges. It will be simply because people got too frustrated trying to open the packaging and just gave up…﻿
It’s always a pleasant and welcome surprise when an opening band exceeds expectations and turns up on stage with swagger and conviction. A short, tight set of memorable tunes doesn’t hurt either. Faced with the daunting and sometimes thankless job of warming an audience up for the headlining act, some bands are more up to the task than others. Last week, LA’s The Broken West squeezed onto the tiny stage at the Rock & Roll Hotel and did an excellent job of firing-up the audience for The Long Winters by playing a rapid-fire set of tunes, “shimmering and cool, with sharp edges and soaring melodies.”

Three or more microphone stands on stage is always promising because it usually signals the possibility of duets and harmonies. The Broken West had four mic stands, and each one (along with their respective microphones) was put to very good use. Front man Ross Flournoy handled the main vocals, but nary a chorus went by without the rest of the band chiming in alongside him. By the end of the set Flournoy had broken all but three strings on his guitar in a flailing rave-up. Given the constraints of the stage, it’s amazing that’s all he broke. It’s always a pleasant and welcome surprise when an opening band — relatively unknown to most of the audience — leaves the stage in a hail of clapping, whistling, foot stomping and cheers. Next time around I hope the band they bring to open their headlining performance is equally up to the task. 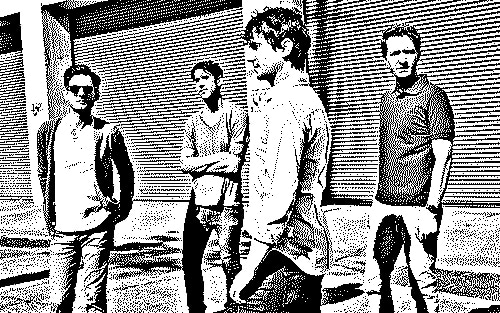 The Broken West
The Happy Medium Song of the Day is called “Down in the Valley” and it comes from the band’s critically acclaimed first ep — The Dutchman’s Gold — back when they were recording as just The Brokedown. (Please use the comments box to share your thoughts.)