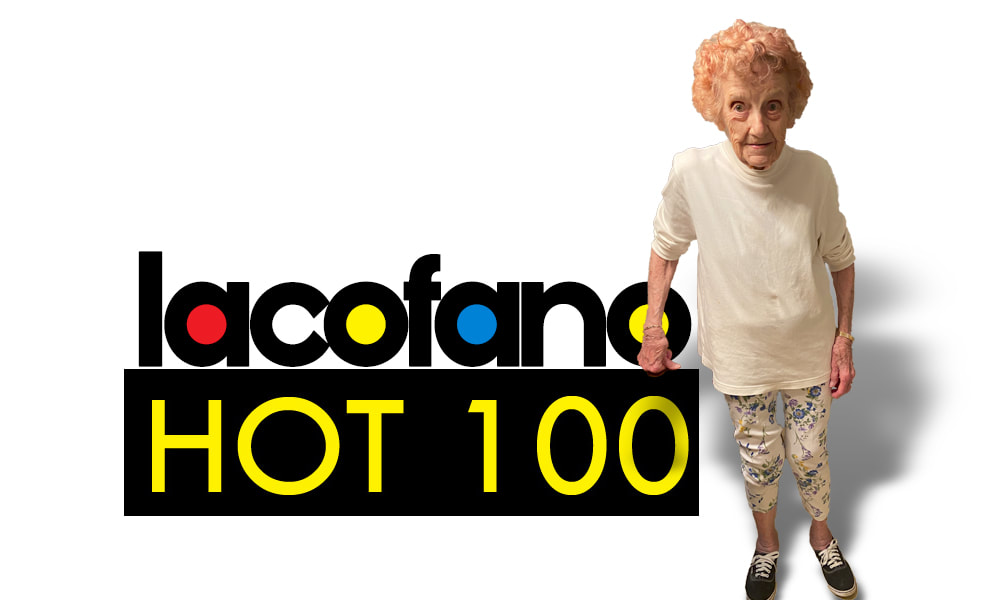 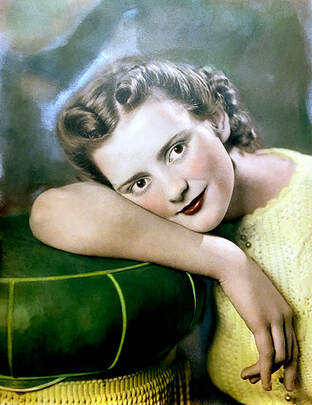 ~ 1938 ~
And of course the most important fun fact about the number 100 is that my Aunt Wilma is celebrating her 100th birthday today! Aunt Willie, as I’ve always affectionately known her, or The Aunt, as she’s often referred to these days, was born in Steubenville, Ohio on May 22, 1920; the same year a vanilla ice cream bar on a stick got dipped in chocolate and given the name “Eskimo Pie.” That’s four years before someone conceived the concept of adding a slice of cheese to a hamburger, and seven years before the invention of Kool-Aid, corn dogs and the jukebox.

Given Aunt Willie’s sassy self-sufficient nature, it seems appropriate that 1920 was also the year the Nineteenth Amendment was ratified and women were guaranteed the right to vote. Interestingly, it was also the same year America had a de-facto woman president for a year and half when the First Lady, Edith Wilson assumed her husband’s role after he suffered a debilitating blood clot that caused paralysis, partial blindness, and brain damage. She controlled access to the president and made policy decisions on his behalf.  When something needed to be signed or written, she put a pen between his fingers, wrapped her hand around his, and scrawled the necessary words across the page. 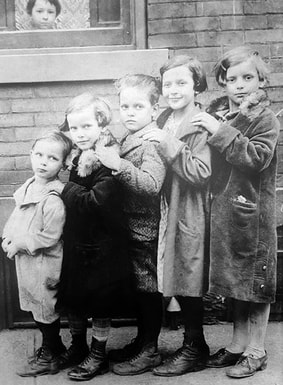 ~ 1930 - far right ~
Wilma Katherine Yoklic moved from Pittsburgh to Weirton, West Virginia when she was ten. Weirton is a steel town located across the Ohio River from Steubenville, and about 35 miles west of Pittsburgh. She taught herself how to drive when she was 16.  Eighty-four years later, she still gets behind the wheel, and even famously managed a 16-point turn in my mother’s driveway recently so she wouldn’t have to back her car out into the street. Whether the neighbor’s fence “got in the way” while she was conducting this maneuver is still a hotly contested detail. 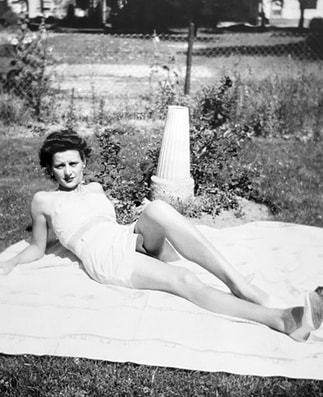 ~ 1945 - Honeymoon ~
According to my cousin Mark, his mom's first date was with “a local Croatian stud named Michael” who apparently thought a movie ticket entitled him to a kiss with his bucket of popcorn. When he tried to get fresh, Willie told him to “hit the road!” In 1938 she moved to Cleveland to live with a cousin in Collinwood. Four years later she met my grandfather’s brother, Larry Iacofano, at Cleveland Graphite where they both worked; she running a lathe, and he, no doubt, running from her charms when he wasn't moving parts around the factory in support of the war effort. Larry and Wilma got married in 1945 and they were together until his passing in 2014. They had two sons—my illustrious and talented cousins Tim and Mark—who she disciplined with a wooden spoon and the same tough love that was doled out in our house via a wooden spatula reinforced with masking tape. 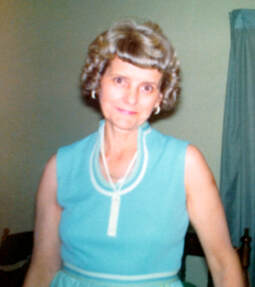 ~ 1977-ish ~
Willie was a teachers' aid at Memorial, the local junior high school, and then at Brush, the adjoining high school. It was there she earned the nickname “Mrs. Ice”—not because of her frosty temperament—but more likely because the number of vowels in “Iacofano” made it too intimidating for most of the student body to pronounce her last name correctly. So it just got shortened to “Ice,” which my Uncle Mike used to answer to and my cousin Mark still does. Last year one of her students tracked her down and talked her into attending the Brush high school reunion. Willie got picked up, spent some time hanging out with a group of kids who were old friends, and was home by 9:30 that night. 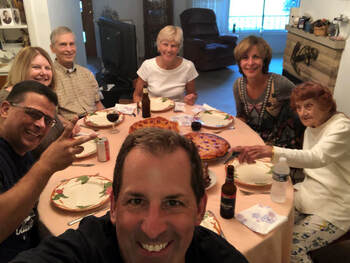 When it comes to hospitality, Willie’s table is the place to be for true kitchen communion. Like the loaves and fishes there’s always unending fresh baked pizza coming out of the oven to be cut with scissors. And no matter how many are gathered—a loyal nephew who stops by once a week for lunch, a carload of relatives in from out of town, or Mark and his entire Fox Sports TV crew—the hospitality is unparalleled, the food is plentiful, the storytelling is packed with incriminating family history, and a ribald sense of humor that belies her years but not her upbringing, always prevails. 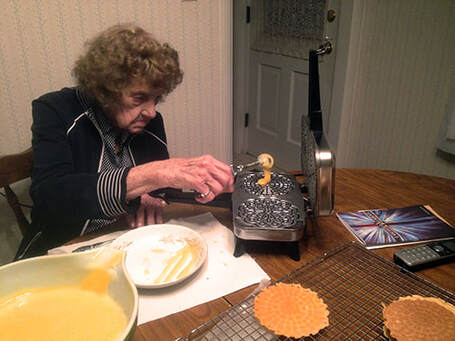 ~ Making Gold ~
And no visit would be complete without a complimentary to-go baggy of pizzelles, or “Willie's Gold." When my sister Cathleen and I finally got Willie to share the secret recipe for her signature Italian cookie that has been a staple for over half a century, it was like strong-arming MacDonald's to reveal the ingredients in the Big Mac's “secret sauce." Of course it turned out there was really nothing special about the mixture that got poured onto the silvery hot griddle…it was the technique for timing how long the press needed to be closed to produce the perfect cookie!

I remember calling Cathleen when I eagerly made my maiden voyage with Willie's recipe and my shiny new Cucina Pro pizzelle maker. “I must be doing something wrong,” I said.

“They're either burnt or not completely cooked,” I complained.

“When's the last time you prayed?”

“When's the last time you said a Hail Mary?”

“Her directions are: 'say four Hail Mary's and the cookies will be done.' You're either praying too fast or too slow!”

“Are yours burning or coming out undercooked?”

“No? Well how slow or how fast are you saying your Hail Mary's?”

“What? Do I need to record her saying four Hail Mary's next time I'm in Cleveland?”

"How come your Hail Mary's are timing out right and mine aren't?"

“I'm not saying four Hail Mary's. Don't tell Willie, but I just use a timer. Use the one on your iPhone. Set it to one minute and 45 seconds, or one minute and 30 seconds if the griddle is really hot.”
​
Works every time…
Much to our family's disappointment, Aunt Willie is not getting the birthday celebration she earned or deserves today. Sure, she'll have some family spend the day with her, but not the big contingent that had planned, pre-COVID, to gather in Cleveland this weekend and really make a party of it. Instead we'll convene virtually in a chaotic Zoom chatroom to toast our lovely centenarian — who will probably spend the entire team saying “Whaaaat?” because she's forgotten to wear her hearing aids. 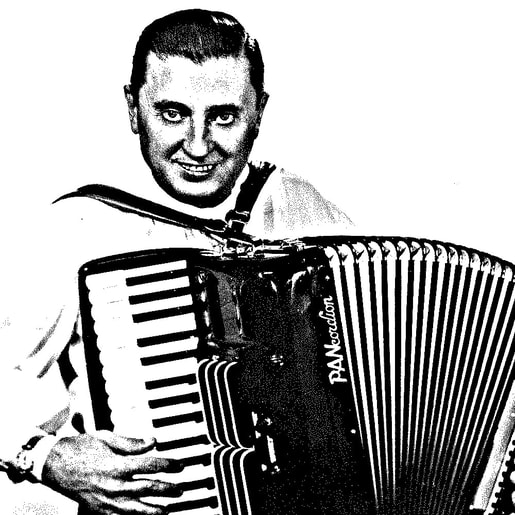 The Polka King, Frankie Yankovic
Rock n' roll, is all about attitude, something my Aunt Willie has in spades. But rock n' roll doesn't really feel appropriate for the woman who swooned to the crooning of Perry Como, Jerry Vale and Dean Martin. And even though Dean was born in Steubenville, Ohio three years before Wilma Katherine Yoklic, it's polka music from her Croatian upbringing and woven into the diverse ethnicity of Cleveland's very fabric that has a special place in her heart. In Cleveland, the Slovenian accordion player Frankie Yankovic, better known as “The Polka King,” grew up in the same Collinwood neighborhood that Willie moved to in '38. His weekly tv show, "Polka Varieties" was one of her favorites. Frankie was considered the premier artist to play in the "Slovenian style" during his long career. And since you're dying to know, I'll save you the time of googling what exactly that means: The Slovenian style polka band always includes a piano accordion, chromatic accordion, or the Diatonic button accordion (also called a "button box"). Some bands in Slovenia use keyboard instead of accordion. The other melody instrument is a saxophone or clarinet, and the rhythm instruments include drums, bass, and guitar or banjo. Of course my record collection is unforgivably devoid of polka music, apart from the thematically similar "Roll Out the Barrel" and "In Heaven There Ain't No Beer," both of which I have cued up to generate interesting late night dance floor moves when I DJ. But today, in honor of a very special woman who is dear to our Italian, Irish, Croatian and Slovenian hearts, “Cleveland The Polka Town” is the Happy Medium Song of the Day that sounds like part of the soundtrack that continues to comprise the sweet symphony of Wilma Iacofano's long life. Happy Birthday from all of us who wanted to be there with you today, Aunt Willie. If I was standing in your kitchen I'd give you a big hug and say "I love you and I hope you live 100 more years." But you would just swat at me and say:
(Please use the comments box below to share your thoughts or wish Aunt Willie a happy 100th birthday!)