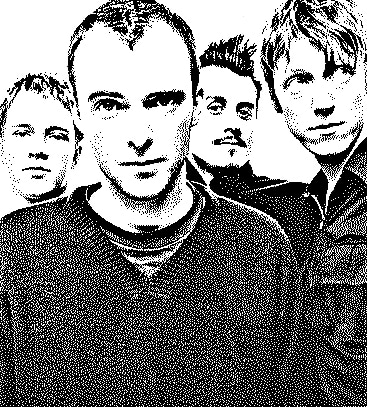 Travis
The amazing Scottish band, Travis, released their 6th album last week and tonight they are playing their only 2008 US show at the Troubadour in LA… If I’ve said it once, I’ve said it a thousand times… will someone please tap these boys with whatever magic wand necessary and declare them the superstars they truly deserve to be? I mean c’mon now! Ever since my sister Cathleen turned me on to the band, I have acquired every recording, a live concert DVD, a DVD collection of all their music videos, and I have seen them every time they’ve played Washington, DC; probably about four or five times. I’m not vying for groupie status or anything — just saying that this band has paid its fair share of dues and now it’s time for them to receive the fame and fortune they deserve. Believe me, I’ll be both happy and sad when that happens, too. Happy because it’s fair. Sad, because I like the fact that I can still get tickets to see them at the 9:30 Club (which they absolutely tear down whenever they’re in town), and I can’t abide big stadium/arena shows — the likes of which they play everywhere else in the world. I’m thrilled they get to support REM in Peru and Venezuela after tonight’s show in LA, but I hope they’re back at the 9:30 Club in March when the return for a proper tour of the US. If terrestrial radio still ruled the airwaves Travis would be huge because they’d be unavoidable. Every DJ with an ounce of musical superstar savvy would be playing their music round the clock. They wouldn’t have to be told to — they’d want to because they’d want to be part of something big as much as everybody else! Listen, don’t waste your hard-earned dough on The Eagles, or The Who, or AC-DC or Madonna. Wait until March and buy yourself, and some friends, tickets to see Travis. Witness the new heirs to the rock n’ roll throne in a small venue while you still can. You won’t be disappointed.

Today’s Happy Medium Song of the Day is “Get Up” from the album, Ode to J. Smith.
(Please use the comments box to share your thoughts.)