Happy Medium Productions
﻿One thing always leads to another. One more candle on the cake leads to “progressive” lenses. A clever television commercial leads to an impulse purchase. A wrong turn leads to a longer traffic jam than the one you tried to avoid by making the turn… I know I haven't sent out a song of the day for a while, but rest assured it wasn't for lack of good material. It's been like Christmas around here with all the great music I've been given recently (thanks to Dave and Dave), purchased (Tower Records—which I have been pecking away at like a hungry buzzard as the prices go from 40% off to 50% off and so on—and Joe's Record Paradise where, once again, Liam's indoor soccer practice keeps me sequestered; crawling around on the floor picking through milk crates of used discs in the “$1 and Under” section), and downloaded (eMusic and My Space still being the best resource (for my money) for legal downloads. 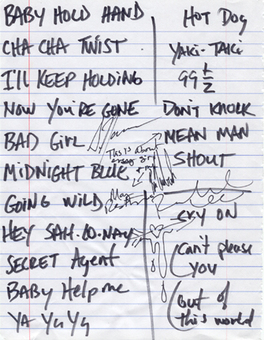 Ambitions set list
A few weeks ago, I chose The Detroit Cobras'  “My Baby Loves the Secret Agent” for the Song of the Day. Last night I had the chance to see them perform live. Phew! Rachel Nagy and her band kicked ass with a fast and furious set of  20 or so 2-3 minute songs that were the perfect compliment to her cigarette n' beer soaked voice. If and when you can find the band's recordings, they're typically filed under “rock/soul.” Dare I say The Detroit Cobras are the sound of modern Motown? Perhaps, but I think with the added descriptor: greaser garage music — the kind that makes beefy, muscular guys with Elvis-length chops, greased-back hair, black leather jackets, and harness motorcycle boots dance like hunched over diabolic fiends with their impish little tattoo covered girlfriends who know all the lyrics and can give a rats ass who they slam into while they're being whirled about the dance floor. 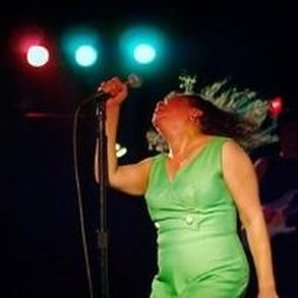 Caz Gardiner
To be certain, it was a nasty weather to venture out in for a concert downtown last night—and I owe Amy Rigby an apology for choosing 14th Street and The Black Cat over Vienna, Virginia and Jammin' Java; although I think she'd probably understand—but it was well worth the trip. One of those rare occasions where all three bands on the bill had something original and special to offer. First up, in front of a practically empty room, were The Ambitions from Washington, DC. Dressed in a bright, lime green dress, vocalist Caz Gardiner lead her band through a toe-tapping, hip-shaking, arm-flailing 35-minute set that definitely breathed new life into the spirit of Motown. I truly think this band would be almost unstoppable if they added a couple of horn players, a tambourine and some soulful backup vocals. All the band's songs sounded slightly familiar, but not derivative, and that made the show all the more enjoyable. See what ya think. I'm pretty sure you're hearing it here first… The Happy Medium Song of the Day — after nearly a three week hiatus — is back in style with The Ambitions and “I Can't Take It” from their self-made, two-song ep. Tomorrow, it's all about “The Death Machine” and spider eaters from Alabama.
(Please use the comments box to share your thoughts.)