It makes sense that one of the most unique bands to ever claw its way out of the Rust Belt in 1975, should come to Washington, DC 42 years later to perform in the basement of a BBQ joint on 14th Street in front of an enthusiastic audience of about 50 people. What doesn’t make sense is how bands like Cleveland’s legendary Pere Ubu still exist. As Roger Catlin writes in his review of the show: "That Pere Ubu is still around at all by now, nearly 40 years after groundbreaking early albums like The Modern Dance and Dub Housing, is kind of a gift; that it continues to record such consistently strong material, on 2014’s Carnival of Souls and the new 20 Years in a Montana Missile Silo, is almost a miracle.​
I was first introduced to Pere Ubu in 1978 by my beloved high school English teacher and dear friend to this day, Ann Porath. When I say “introduced,” I don’t mean that Ann actually played their music for me. In fact, I doubt there are many Pere Ubu albums mixed in alongside Ann’s dusty copies of Joni Mitchell records. I think what happened is Ann knew I loved music and she asked if I had ever heard of them. The fact that Ann had a good friend who was dating the band’s keyboard player at the time, elevated both my curiosity in the band and Ann’s coolness factor in one fell swoop. I immediately sought out The Modern Dance, and on first listen I knew I was not in Kansas anymore, musically speaking. 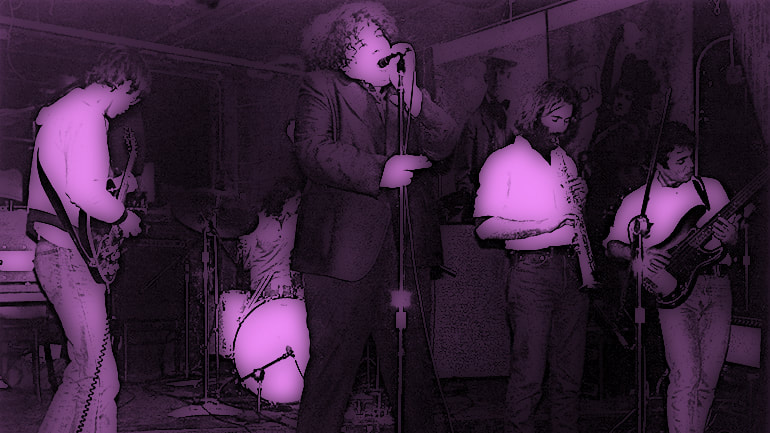 Pere Ubu, the early days.
Steven Grant writes in The New Trouser Press Record Guide: “Pere Ubu combined disorienting—often dissonant—rock and urban blues in a stunningly original and outlandish mix, but never lost an urgent, joyous, party atmosphere. Pere Ubu are to Devo what Arnold Schoenberg was to Irving Berlin.” Ha! Well, yes all those elements were definitely in play the other night when the band showcased music from their new album, 20 Years in a Montana Missile Silo, but that barely scratches the surface of what took place in the basement of Hill Country BBQ. 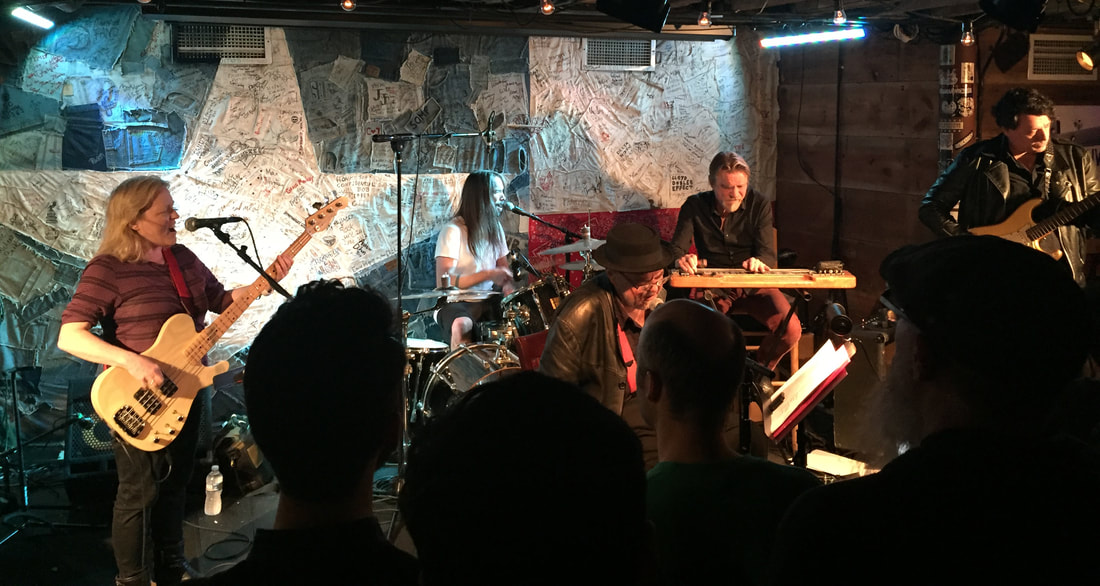 Pere Ubu on stage at Hill Country BBQ on November 9, 2016.
The latest version of Pere Ubu is the embodiment of the adage “rode hard and put away wet.” There is nothing glamourous, youthful or “rockstar” about them. The lead singer performs seated in front of a music stand holding a sheaf of lyrics. He needs suspenders to hold his trousers up, a cane to shuffle on stage to his seat, and reading glasses to see the lyrics he’s gonna sing. The rest of the band look like it’s been a while since they had a hot shower and access to a washing machine. And yet… the music was incredible, despite the fact that on several occasions Thomas didn’t think so and made no bones about berating the band, yelling things like: “Play hard! Like you mean it!” and “Bunch of damn girl scouts.” Later he shouted to them mid-song: “Control! Control!” Each time he lashed out, the band seemed to absorb his verbal abuse and play with greater intensity.
In 1991 Pere Ubu released an album called World’s in Collision. It hinted at a poppier, catchier and dare I say, mainstream side to the band that I wouldn’t have even guessed existed, but producer Gil Norton (known for his work with the likes of: Julian Cope, The Fixx, Genesis, The Human League, The Police, XTC, Psychedelic Furs and The Waitresses) was able to draw out of them. I was hoping they might have the sense of humor to play one of my favorite songs from the album, given the night’s venue, but they did not. I do have a sense of humor, as well as a penchant for the poppier side of avant gard(en) music, so the Happy Medium Song of the Day by Pere Ubu is
​“I Hear They Smoke the Barbecue.” Light it up boys and girls! (Please use the comments box to share your thoughts.) 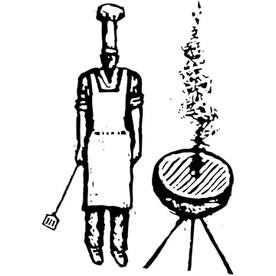