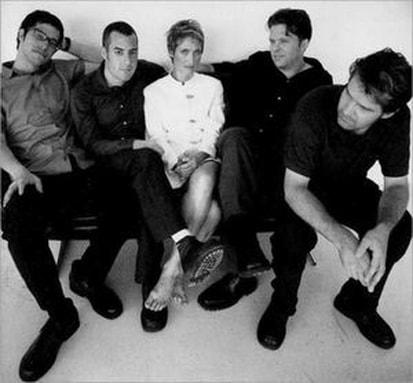 Disillusioned with the label’s shortsightedness and frustrated with their demand for two new songs to boost the compilation’s marketability, Lloyd retreated back to the basics in search of the fun that had once attracted him to rock n’ roll in the first place, and found himself playing in a bar band called The Negatives. Only Lloyd Cole could re-discover the happiness of playing music, by fronting a band called The Negatives.
The Negatives featured Jill “I Kissed a Girl” Sobule on guitar and harmonies, ex-Dambuilders bassist Dave Derby, and Vitamin C collaborator Michael Kotch on guitar. Robert Quine and Neil Clark add some additional guitar work once again, while Fountain’s of Wayne’s Adam Schlessinger and Too Much Joy’s Bill Wittman along with Stephen Street and Mick Glossop all contribute to the album’s production. The result is a poppy collection of upbeat songs with sing-along choruses. As always, Lloyd never strays far from his trademark narratives of the lovelorn and the forlorn, but this time around, self-deprecation and fun are emphasized more than snarky cynicism.

For me, The Negatives isn’t much of a departure, if it’s even a departure at all. Lyrically the songs may be a little more lighthearted, and personally/professionally Lloyd may be enjoying a long-lost sense of freedom playing them with “a band,” but the band itself remains fairly anonymous in the mix. Anyone familiar with Jill Sobule’s work knows she is an excellent songwriter with a terrific sense of humor. Little of that personality and talent is apparent on The Negatives and I wonder how much more interesting the album would have been if Lloyd had been in a more collaborative mood rather than simply in search of some accomplished pals to help perform his material in some New York City bars. Of course the flip side to that minor complaint is that The Negatives is a solid collection of classic Lloyd Cole compositions which, if you like those sorts of things the way I do, means that I don’t really have much too complain about at all.

The Negatives marked the first time a Lloyd Cole release failed to make it into the charts — but who’s counting. The Beach Boys gave us “Surfer Girl,” Marshall Crenshaw was looking for a “Cynical Girl,” and The Rolling Stones sang about a “Stupid Girl.” Today’s Happy Medium Song of the Day by Lloyd Cole and The Negatives is all about the “Impossible Girl.” I think a thematic mix-tape is screaming to be made.
(Please use the comments box to share your thoughts.)