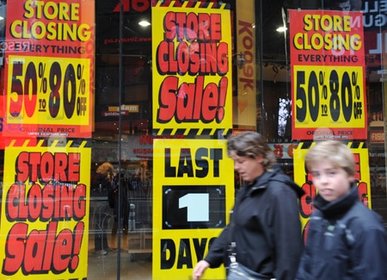 Sad days indeed...
Last week the New York Times reported that the Virgin Megastore in Times Square is closing, and being replaced by Forever 21, a popular chain that sells moderately priced clothing. Pretty soon there won’t be any stores to walk in to and buy new CDs or records… Now I could blah-blah-blah for hours about this sad state of affairs and all its implications and ramifications, but instead I’ll just say this: in spite of everything… I’m gonna miss ‘em when they’re all gone.

Yes, I love digital music. Yes, I think the iPod in all its configurations is the most elegant piece of technology in my lifetime. Yes, I love the ease with which I can use the internet to track down and acquire music and information about even the most obscure band that ever released a one-off 45. And yeah I love my “digital jukebox.”

But… it’s just not the same as spending an entire afternoon thumbing through musty record bins or flipping through a randomly arranged racks of CD’s. It’s not the same as browsing while listening to whatever the guy working the cash register thinks is great music everybody should be listening to. It’s not the same as walking into a store and having the owner pull a CD out from under the counter that he’s been saving just for you because based on other things he remembers you bought, he thinks you might enjoy listening to this one too. It’s not the same as the knowing smile and nod from the cute punk rock girl as she bags your purchases and hands them to you reaffirming “that is the best album I have heard all month.” It’s not the same as having a lyric sheet to read and cover art to study — no matter how small. It’s not the same, and it has more to do with context, continuity, and making important connections than just waxing nostalgic about how things used to be. Pull any record or CD off my shelf and I can probably tell you when I got it,  where I got it, why I got it, who I got it with, and what it was like hearing it for the first time. I can probably also tell you something relevant about the artist, the songs and maybe even the guy who produced the recording. My vast collection of mp3’s on the other hand, seem almost ephemeral because there’s nothing really tangible about them. They’re just files without any liner notes, lyric sheets, gatefold sleeves, or cover art. They don’t tell me the musicians names, who plays what instrument, authored the song or even composed the music. Above all, getting back to the retail side of things, it saddens me to think that today’s HMSOD might not even have existed if it weren’t for a girl working on a certain Manchester Megastore check-out desk…

The Freshies
Every once in a while I repeat a song from the old e-mailed edition of the the Song of the Day, but its always been one of my favorites and it deserves a revisit in this context. By the way, I can still remember how excited I was to find The Very Best Of… Some Long and Short Titles — a digital compilation of all The Freshies singles that I owned, but had started to wear out after repeated needle drops. Oh yeah, I was downstairs in Bleecker Street Records with my friend Andy when I made the discovery and afterwards he took me to an amazing Indian restaurant where we stuffed ourselves with curry, nan and cold beer and talked for hours. The Happy Medium Song of the Day is “I'm In Love With The Girl On A Certain Manchester Megastore Checkout Desk” by Chris Sievy and The Freshies.
(Please use the comments box to share your thoughts.)