Happy Medium Productions
So it's Friday and that means we've finally gotten around to the fifth and final band of the night from my concert last Sunday. Phew! It's the show that just keeps on giving… I featured The New York Dolls on the Song of the Day once before and played “Trash,” one of my favorite tracks off their first LP. I think I also mentioned that I was first introduced to David Johansen and the rest of the band unexpectedly one night on the venerable Don Kirshner's Rock Concert. I hadn't tuned in to watch the Dolls, but I couldn't take my eyes off the screen whenever they were on. Thigh-high platform boots, skin-tight leopard print pants, eye-liner, blush and wildly teased up hair, and a thick, gravelly New Yawk accent that could somehow transform the word "trash" into a three-syllable word. They were mesmerizing to watch and impossible to stop singing — especially after I got up the nerve to purchase their debut record. I think Ira Robbins sums up the Dolls' appeal best and it has much less to do with spectacle and far more to do with purveying the spirit of a movement: 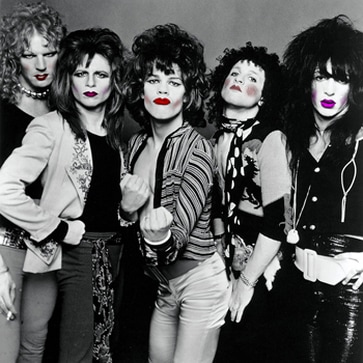 The New York Dolls
“The New York Dolls had the style, attitude, rawness and audacity to reinterpret the notion of punk as it had existed in the '60s (i.e., with no political sensibilities but a debt to R&B) to create a decidedly '70s over-the-edge new reality prior to punk. Although they made only two proper albums and were a meaningless relic by the time the Sex Pistols played their first gig, the Dolls singlehandedly began the local New York scene that later spawned the Ramones, Blondie, Television, Talking Heads and others. A classic case of the whole being greater than the sum of its parts, the Dolls were much more than just a band. Their devoted original audience became the petri dish of a scene; they emulated their heroes and formed groups in their image. Detractors' venom inspired countless teenage rebels. Their signing to a major label set an example of commercial feasibility; their subsequent failure to shift product turned the record industry anti-punk for years. After building their reputation on seedy late-night New York stages, the Dolls' awful magnetism netted them a label contract. Todd Rundgren took the production reins, and delivered a great-sounding document with all the chaos intact. A genuine rock classic, New York Dolls contains “Personality Crisis,” “Looking for a Kiss,” “Trash” and other wondrous slices of gutter poetry punctuated by David Johansen's slangy howl and Johnny Thunders' sneering guitar. No home should be without one.”

A short history on the band's MySpace website echoes Robbins' sentiment: “The New York Dolls created punk rock before there was a term for it. Building on the Rolling Stones' dirty rock & roll, Mick Jagger's androgyny, girl group pop, the glam rock of David Bowie and T. Rex, and the Stooges' anarchic noise, the New York Dolls created a new form of hard rock that presaged both punk rock and heavy metal. Their drug-fueled, shambolic performances influenced a generation of musicians in New York and London, who all went on to form punk bands. And although they self-destructed quickly, the band's two albums remained two of the most popular cult records in rock & roll history.” 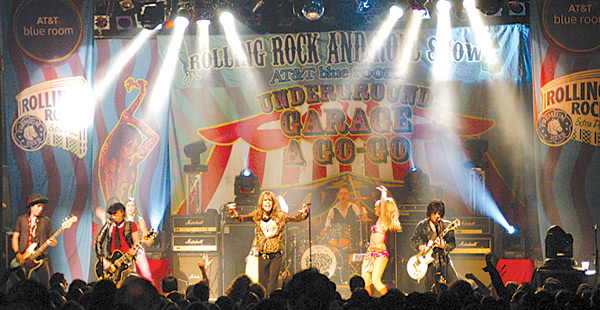 Little Steven’s Rolling Rock and Roll Show featuring the New York Dolls.
By the time I was old enough to get into any clubs in Cleveland, The New York Dolls had long since imploded. I picked up the second album—only available as a British import and ironically titled In Too Much Too Soon—and could only imagine the outrageous splendor of witnessing the band perform live. The closest I ever got to the New York Dolls was David Johansen's solo career and constant touring with ex-Doll, Sylvian Sylvian. Cleveland became a regular stop for the David Johansen Band, and my library of bootleg cassettes documents nearly every performance. Even without all the campy posturing, Johansen was the consummate live performer and more than a few solo shows included live renditions of a few old New York Dolls tunes. Close. Very close. But no cigar… Guitarist Johnny Thunders died in April 1991. Drummer Jerry Nolan died the following January. Artie "Killer" Kane made it to 2004, ironically expiring months after Morrissey brought what was left of the Dolls back together for a show in London that sparked renewed interest in the band and basically brings us to last Sunday where the spirit of The New York Dolls was certainly very much alive, even if half the band was not. The curtains parted as that familiar, rough-throated voice announced: “When I say I'm in love, you best believe I'm in love, L-U-V,” and a Thunder-less, but no less thunderous “Looking For a Kiss” roared out from the PA. For the most part, the 2006 New York Dolls performed an incredible set that satisfied my desire to have experienced that primordial New York punk scene — even just a little. A few songs from the brand new album fell a little short—temporarily derailing the show—while others enabled Johansen to ignite the crowd for a swaying sing-along.  So when it came time to choose a song for this edition of the Happy Medium Song of the Day, I was in a real quandary. Should I play another song from that great debut? “Jet Boy” was a strong contender as the song's live performance on Sunday was particularly inspiring. How about a more obscure track from the lesser known second album? I almost bought the new CD so I could feature a song from it. 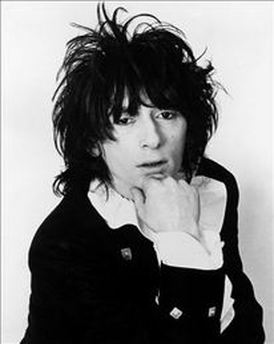 Johnny Thunders
But in the end, it was a touching remark by guitarist Sylvian Sylvian about band members who are no longer around to share the fun of the current reunion that ping-ponged me toward a song not by The New York Dolls, but Johnny Thunders & The Heartbreakers. As the iTunes album review accurately states, The Heartbreakers album, L.A.M.F. is “one of punk rock's most important and enduring statements.” So, in the spirit of the New York Dolls past and present, and in tribute to those members of the band who are no longer able to partake in the festivities of the current tour, the Happy Medium Song of the Day is the pounding, buoyant, guitar crazed “One Track Mind” by Johnny Thunders & the Heartbreakers.
(Please use the comments box to share your thoughts.)