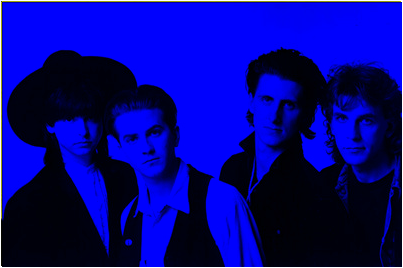 Wire Train
The fifth and (official) final Wire Train album, No Soul No Strain was released in 1992. (The title was apparently a play on words referring to the cover art: nose hole, nose train.) It strikes me as an appropriate swan song because it encompasses just about every sound the band ever experimented with over their near, ten-year run. It’s funky. It rocks. It’s introspective. It’s obtusely poetic. There’s a relaxed feel to the record that teeters on sloppy, but is more likely the band just having fun. To me, this album sounds like a band finally hitting it’s stride and firing on all cylinders.

Of course the irony of that astute observation is that when the band finished recording two follow-ups to No Soul No Strain, their label, MCA, deemed the sessions “too weird” and shelved the material. To this day Snug and Electric remain locked in a vault somewhere, sitting on the shelf because some hack in a suit didn’t like what he heard. (Probably the same guy who said digital music and mp3’s would “never catch on.”)  For some bizarre reason, the same fate befell the band’s performance on VH1’s Band’s Reunited series. They recorded a one-off  “reunion” show at The Whiskey in LA in 2003 — by all accounts, a real kick-ass show enjoyed by all — but the segment was never aired.

It’s harder and harder to find much new information about the band. They have no “official” internet presence and the one “unofficial” website hasn’t been updated in two years. All four band members are still actively making music: Kevin is involved in a project with Renee Stahl called Bella Nova which they characterize as “California cool meets Euro chill.” Fans of Stan Getz will appreciate what they’re trying to do. Brian and Jeff appear as session players for all kinds of people, and Anders works as a movie set-builder.

When you look across your music collection, certain artists stand out as personal discoveries…the ones you heard first and championed everywhere. The ones you stuck with no matter what. The ones you seem to have a special connection with then and now. For me, Wire Train is definitely one of those bands. Their music still makes me want to jump around and dance in an ’80’s new wave kind of way. The lyrics to their songs come back instantly when I hear the first note of a song. And I still laugh when I remember that night at the 9:30 Club the day after Thanksgiving dinner together 23 years ago, when they walked out of the dressing room, and Lori looked at Kevin and said “What the hell did you do to your hair?” The others laughed as he tried to explain his “rock n’ roll hair” to Lori who just wasn’t buying it. She’d seen the real Kevin Hunter the night before and he looked nothing like this.

So as the tryptophan stupor of last night’s dinner wears off, here for your listening pleasure is the final installment of my five-part series on Wire Train. The Happy Medium Song of the Day is “Open Sky.”
(Please use the comments box to share your thoughts.)