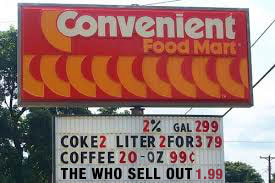 When I was a teenager there was a convenience store by my house that was conveniently named Convenient Food Mart. One summer it inexplicably began stocking a limited selection of cut-out records and selling them for $1.99 from two racks strategically located by the cash register. You could buy a bag of Dan-Dee potato chips, a six pack of 3.2 beer, a couple of Slim Jims, and a record by The Who or The Yardbirds with the upper right corner hacked off — as if I needed yet another excuse to spend my money on vinyl. I don’t know why I remember this particular detail from my adolescence. Maybe it was because The Who Sell Out, The Who Sings My Generation and Live Yardbirds Featuring Jimmy Page weren't the sort of gems you’d expect to find displayed next to cans of Pringles and packets of Oscar Meyer bologna in the check-out line at the local convenience store! Talk about "impulse purchases!" These were highly prized and much sought after additions to my fledgling record collection. The Yardbirds album was even—dare I say it Lori?—a "collector’s item" at the time due to the controversy surrounding its release and recall. (The Yarbirds originally objected to releasing the sub-par live recording, but after Jimmy Page left the band and became famous with Led Zeppelin, Epic Records decided to cash in on his name. Page sued, and Epic was forced to pull the album off the shelves; raising the value of the copies still floating around (in convenient store racks!) exponentially.) Stumbling across records like this while waiting in line to purchase an emergency gallon of milk for the dinner table was like finding money in an old coat pocket. It also made riding home on my bike while clutching a plastic gallon jug of milk and a couple of LP’s very precarious—even for just a few blocks.​

Shameless hucksters: Pete Townshend, Roger Daltrey, Keith Moon, and John Entwistle
I know my record collection is home to other vinyl refugees rescued from the cold confines of the Convenient Food Mart, but The Who Sell Out is perhaps one that is most firmly etched in my memory because I totally fell in love with that wonderfully quirky record and played it non-stop once I acquired it. The album was released in 1967 as an homage to pirate radio stations like Radio Caroline; that regularly featured songs by The Who unlike the BBC, which did not play contemporary musicians. The songs on The Who’s third album are whimsically held together with fake commercials, public service announcements and radio advertising jingles. My friend Pat and I knew them all by heart, and would amuse each other endlessly by suddenly reciting them at any opportunity. In addition to the silly British humor that permeated the faux commercials for real products like Odorono deodorant and Heinz baked beans (“what’s for tea, mum?”), there was, of course, the music. The Who Sell Out—purchased out of chronological order from a convenience store—filled in the developmental gaps in my Who record collection. The “mini-opera” on the previous album, A Quick One hinted at an unique level of songwriting sophistication that would erupt in full force three years later on Tommy and seven years later on Quadrophenia. However, for me, it was The Who Sell Out that really displayed the band’s creative prowess and budding maturity as songwriters and musicians. Despite the silly diversions in between the songs, The Who Sell Out makes sense as the perfect bridge between the band’s transition from releasing rapid-fire hit singles to proficient composers of groundbreaking musical productions. A “pop art pop masterpiece,” as one music critic wrote, and I couldn’t agree more.

With The Who’s third album occupying such a hallowed spot in my collection, I found myself in a bit of a quandary when the multi-talented Petra Haden released a completely a cappella interpretation of the album in 2005. I’ll be honest. I unapologetically have very little patience for a cappella music. I find most of it to be cloying and too smart for it’s own damn good. However in this case, I’m willing to make an exception. In a Boston Globe interview even Pete Townshend had to say: “I was a little embarrassed to realize I was enjoying my own music so much, for in a way it was like hearing it for the first time. What Petra does with her voice, which is not so easy to do, is challenge the entire rock framework ... When she does depart from the original music she does it purely to bring a little piece of herself—and when she appears she is so very welcome. I felt like I'd received something better than a Grammy.” For those of you who are unfamiliar with Petra, allow me to save you the googling… She is an American musician and singer who has been a member of several noteworthy bands including: That Dog, Tito & Tarantula, and The Decemberists. She has contributed to recordings by Bill Frisell, The Twilight Singers, Beck, Mike Watt, Luscious Jackson, Foo Fighters, Green Day, Weezer, The Rentals, Victoria Williams, Yuka Honda, The Gutter Twins, Sunn O))), and Cornelius. She is the daughter of the jazz bassist Charlie Haden; the triplet sister of bassist Rachel Haden (her bandmate in That Dog) and cellist Tanya Haden (married to singer and actor Jack Black) with whom she has performed as The Haden Triplets; and the sister of bassist-singer Josh Haden, leader of the group Spain. Phew! Talk about connected! Thank you Wikipedia. 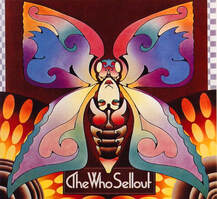 If, like me, you just can’t get enough of The Who’s superb third album, I highly recommend checking out the vocal magic Petra Haden spins with just her voice and an 8-track recorder on Petra Haden Sings: The Who Sell Out; a song for song cover of the entire album. The whole record is a clever and innovative tribute that is anything but a note-for-note rendition, and her version of “Armenia, City in the Sky” is the perfect song to end a month of covers with The Happy Medium Song of the Day.
​(Please use the comments box below to share your thoughts.) 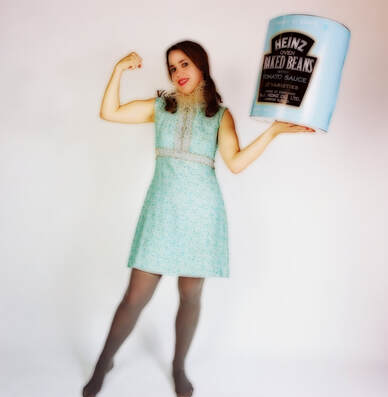