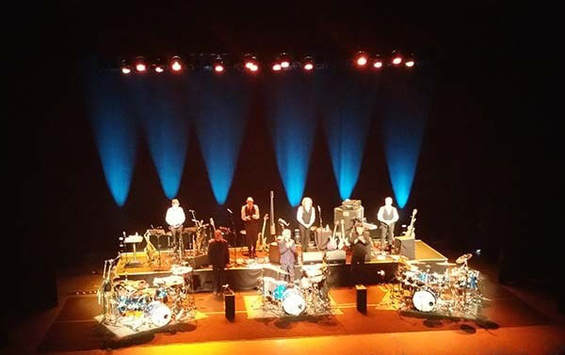 King Crimson on stage in 2017.
Last Saturday I witnessed an amazing concert at George Washington University’s Lisner Auditorium. I knew something special was in store as soon as I walked into the theatre and saw three glittering drum kits on stage awaiting a beating. Then the lights dimmed and eight musicians dressed in natty suits appeared. They were immediately greeted with the first of the evening’s many standing ovations — and they had yet to play a single note! Of course as soon as the band did begin to play it was obvious that the three drum kits were not an unnecessary extravagance, but absolute necessities in King Crimson's radical action to unseat the hold of monkey mind (the title of the band’s latest album).
King Crimson’s music is a balanced tightrope-walk of bombastic cacophony and extremely delicate harmonies with intricate instrumentation.  The music is a mesmerizing meld of avant garde jazz, rock, folk, classical, and ambient textures. Many of the band’s compositions begin with the tumultuous intensity that characterizes the final crescendoes of songs by other bands. It can be difficult music because it’s never obvious where it’s taking you — even when you’ve listened to it as much as I have over the years. It is certainly disciplined music. I can’t begin to imagine what this band’s practice sessions are like. Former drummer Bill Bruford once called the band’s founder and grand maestro, Robert Fripp an amalgam of Stalin, Gandhi and the Marquis de Sade. 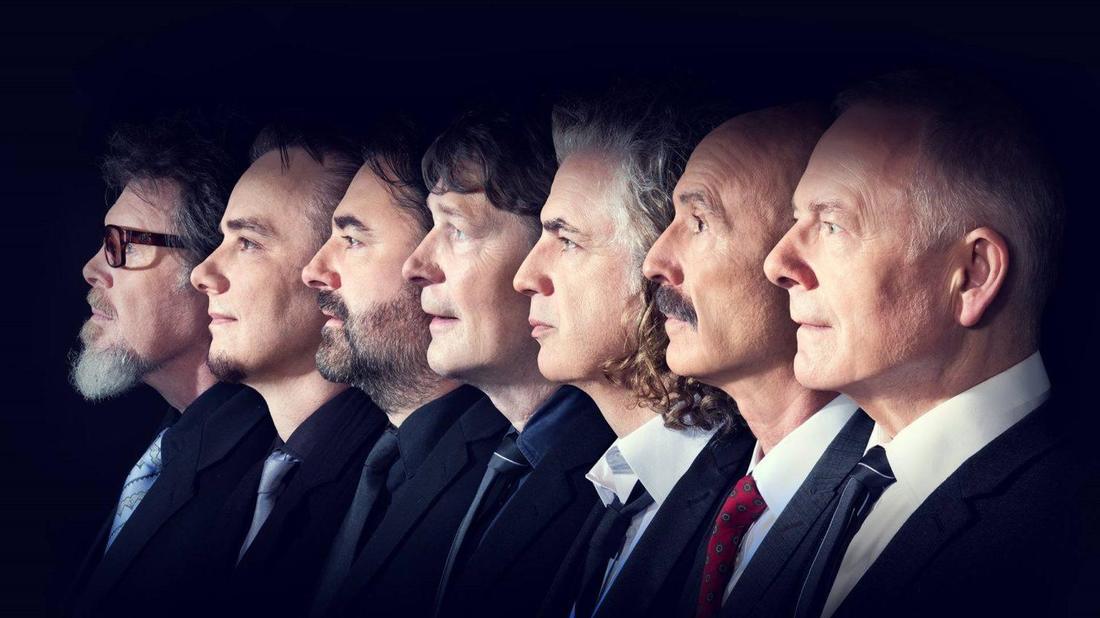 2017 Line-up: Pat Mastelotto, Gavin Harrison, Jeremy Stacey, Mel Collins, Jakko Jakszyk, Tony Levin, Robert Fripp
Fripp is one of rock’s most enigmatic characters and musical geniuses. When you listen to King Crimson music there is the basic song, comprised of traditional rock components (bass - drums - guitar), and less traditional rock components (mellotron - saxophone - violin). Then there is the underlying, often understated, but never underwhelming, sounds emanating from Fripp’s guitar, washing over and  weaving its way around the rest of the instruments. Sometimes the sounds can be brutal, clipped chords just shy of feedback. Other times the sound is a frenetic run up and down the neck of the guitar like frantic spider legs dancing across the strings. And still other times Fripp makes his guitar sound like sparkling sunlight looks dancing off the waves of undulating water. ​
It has been stated many times that King Crimson is not so much a band as it is 'a way of doing things.' Less frequently stated but equally true, is the fact that the band inevitably seeks different ways of doing things. Like one concert-goer said as we were walking out after the show, “I feel like I’ve just spent three hours in trigonometry class.”

This entry probably won’t appeal to a lot of folks, but I just can’t ignore my sweet tooth for prog rock; a genre that King Crimson more or less introduced in 1969 when they opened for the Rolling Stones in London’s Hyde Park. (Can you imagine?) But who knows? Maybe I’ll (l)earn King Crimson one more interested listener looking for a musical challenge that goes beyond the simple equation of verse - chorus - verse. Math was never my forte, but The Happy Medium Song of the Day is an adventure in musical mathematics by King Crimson entitled “Pictures of a City including 42nd at Treadmill” from the 1970 album, In the Wake of Poseidon. ​​
​(Please use the comments box to share your thoughts.) 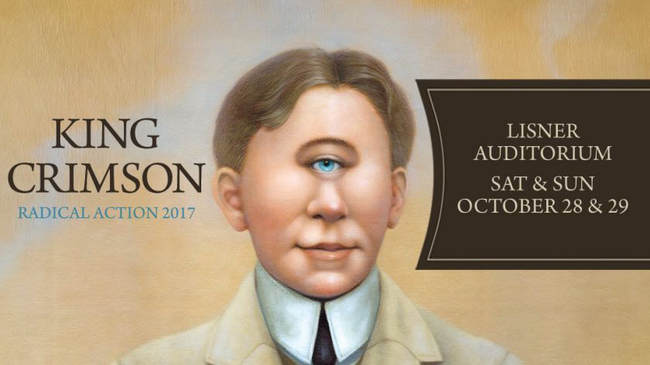