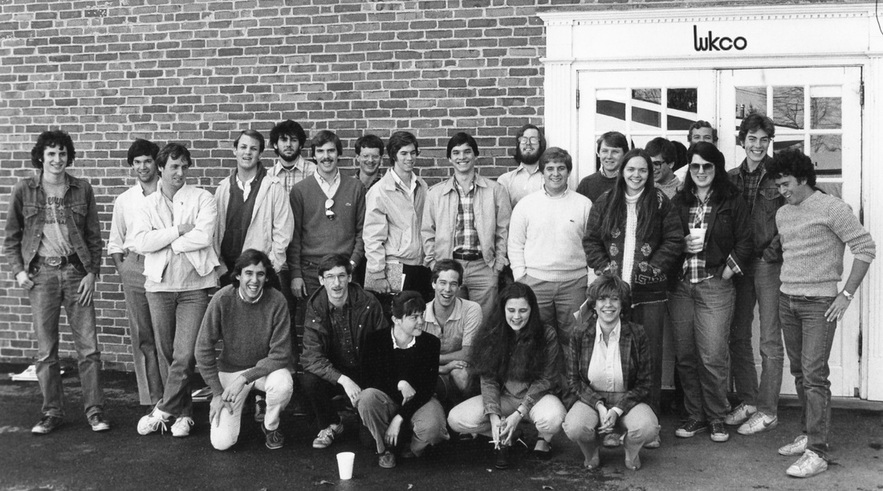 The 1981-82 staff of WKCO Radio. That’s me standing third from the left.
﻿When I was a senior at Kenyon I had an early morning radio show on WKCO (or Wick-i-so Radio, as my friend Jim used to like to phonetically bastardize it). Every Thursday morning I had to haul my sorry ass out of bed by 4:30 am and make my way over to the cold basement of Farr Hall. Opening the door to the station had the same effect as letting the stale air out of an old balloon — that someone with week-old beer breath had blown up. Inevitably the station smelled like a locker room harboring stale pizza thanks to whoever had just gotten off the air a few hours earlier. Inevitably the UPI news wire machine had pooled about 100 yards of paper onto the floor overnight. And inevitably no one had bothered to file a single fucking record from the night before. So before I could even start to pull news stories off the wire and work out what records I was going to spin, I had to clean up from the night before. 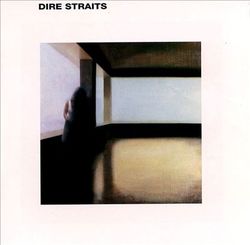 One morning I remembered finding the first Dire Straits album filed under “D” in the rock section. Based on the cover design and the length of the tracks, I was certain it was a wayward jazz LP that had been mislabeled. It looked too “artsy” for rock n’ roll with song titles like “Sultans of Swing” and “In the Gallery.” I put the record on the bottom of the stack and continued filing; pissed off that the Wednesday night crew was so careless.

Weeks later, after reading a glowing and fascinating article about Mark and David Knopfler in Melody Maker, I dug that album out of the “D” jazz bin where some idiot had unknowingly shelved it away where no one could find it, and premiered “Sultans of Swing” on my Thursday morning show. Amazingly, something happened that never happened before: the phone rang. It scared the shit out of me. There’s nothing like the harsh, unexpected ring of a telephone to get the blood flowing early in the morning. The caller wanted to know who the band was and what else I could tell them about the album. “It’s a classic case of not judging a book by its cover,” I can remember saying. “If you weren’t careful you might mistake it for a jazz album…”

I think the first three Dire Straits albums are my favorites. By the time the band became the snake devouring it’s tail; singing about MTV to get airplay on MTV, I had lost interest. But then Mark Knopfler recorded the soundtracks for Cal, Local Hero, and Comfort and Joy and it was clear that he hadn’t forgotten what to do with that wonderful signature guitar playing that I first fell in love with on the first Dire Straits album. Wistful, celtic sounding melodies mixed in with that shimmering, bluesy guitar proved to be a winning combination and the perfect musical backdrop to three of my favorite films. And then… nothing. Again. Well, not really. The man has been busy recording a number of solo albums, playing with other musicians and even producing the likes of Bob Dylan, Willy DeVille and Randy Newman. Not that I would know, because I lost track of him, stopped paying attention, went on to bigger and better things, wrote him off, and basically misfiled him and his current work in that bin labeled: has-been. Silly me.

Until now when Mark Knopfler showed up on Simmer Down! Don’t Make Me Come Up There; my friend Tommy’s double-cd “Best Songs of 2007” compilation. (How he came by the song is a story only he can tell). “Punish the Monkey” is the last track on disc 2, labeled “The Quiet Stuff,” and it is vintage Mark Knopfler both musically and lyrically. In an era of finger pointing and the inability to take responsibility for one’s actions, the song  rings with a darkly humorous sentiment that is so appropriate for our times. “Punish the Monkey” can be found on his 2007 release Kill to Get Crimson, and it really makes me wonder what the hell Mark Knopfler has been up to between the demise of Dire Straits, the release of his last soundtrack, A Shot at Glory, and now. This song makes me want to go back and see what I might have missed  and figure out why Knopfler has been flying so far below everybody’s radar. It’s that good. And it’s the Happy Medium Song of the Day. Thanks, Tommy.
(Please use the comments box to share your thoughts.)