Soho, London
No band embodies the rollicking, and reflective spirit of Irish music like The Pogues. And while the musical genius of The Pogues has always been a team effort, the poetic brilliance of the band is largely the work of Shane MacGowan 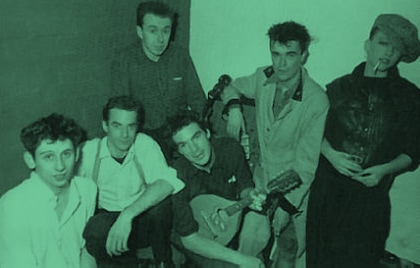 The Pogues
Originally known as Pogue Mahone (Gaelic for “kiss my ass”), the band shortened its name before releasing its debut LP on Stiff Records. Red Roses for Me is interesting for the embryonic sound of musicians with a variety of backgrounds trying to satisfactorily incorporate their Irish heritage with their pop and punk music sensibilities, and not end up sounding like some demented version of the Irish Rovers (who, don’t get me wrong, I cherish as a guilty pleasure). It would take the band three albums to finally get the mixture perfect with the 1988 release If I Should Fall From Grace With God. In between, there was a moment of pure musical and poetic brilliance that is both quintessentially Irish, exceptionally beautiful, and musically/poetically perfect.

Rum, Sodomy & The Lash was the Elvis Costello-produced follow-up to the band’s debut and it features a growing stylistic ambition and sophistication both musically and lyrically. There are fewer traditional cover songs here and more originals by MacGowan who, had obviously begun to fancy himself as the besotted reincarnation of Brendan Behan and James Joyce, with a little Tom Waits thrown in for good measure. But in 1986, the band released a (now highly treasured) EP called Poguetry in Motion. All four songs on the EP were originals and each one showcased the band’s varied musical talents and the lead singer’s growing poetic prowess. My favorite of the four is “A Rainy Night in Soho” because only the Pogues could do the kind of thing for music that James Joyce did for literature: take a cold, wet night in one of London’s sleaziest neighborhoods and turn it into a profoundly moving and beautiful song.

“A Rainy Night in Soho” is a haunting waltz that I’ve always included on my mixed dance compilations, for the sake of a slow dance, and my Irish music compilations for the sake of a sentimental tear or two. It seems an appropriate choice for the day before St. Patty’s day, as well as an appropriate choice for the Happy Medium Song of the Day.
(Please use the comments box to share your thoughts.)