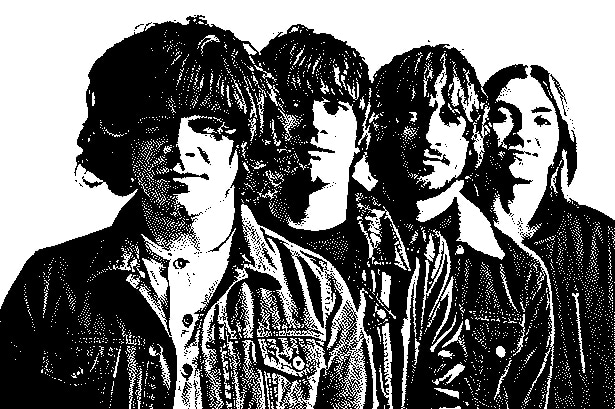 The View
Another musical shot in the dark purchase by Lori turns out to be brilliant and worthy of being the Happy Medium Song of the Day. The View hails from Dryburgh, Scotland which is situated about halfway between Edinburgh and Newcastle Upon Tyne. In other words, the middle of fucking nowhere. Funny thing is, I’m pretty certain that I’ve been to Dryburgh… well, I’ve been through it anyway. About 26 years ago at about 100 mph. The members of this band probably weren’t even alive then.

It was shortly after New Years, and I was on my way back to Exeter, England where I was going to school. I had just spent a raucously memorable three days celebrating New Years in Edinburgh (you know what they say, Christmas in Ireland, New Year’s in Scotland) and a few days later I was walking along the roadside outside Edinburgh trying to hitch a ride “home.” Actually, I just needed to get as far as Newcastle before my Inter-Rail Card ran out at the end of the day and I was forced to hold up a fish n’ chip shop in order to pay for an expensive train ride the length of the country. Knowing I had a long day ahead of me, I had gotten out on the road early. My first ride came quick and took me well outside the city and into the countryside. Good timing. Bad location. For the next hour I walked along fenced pastures glistening with brittle frost. I didn’t see a single car. Plenty of cows breathing smoke into the chilly morning air. Plenty of friendly farmers in tattered sweaters, tweed caps and tall Wellington boots. They whistled and waved a friendly hello, but none of them offered to even fire up a tractor to get me to Newcastle. Just when it started to feel like I was going to end up walking all the way from Edinburgh, I heard a sound. It was the sound of a car. The sound of an approaching car that had comfortably reached 5th gear and was screaming down the two lane road in my direction. As the little sports car passed me in a blur that sent gravel and dust flying in its wake, I quickly pulled back my hitch-hiking thumb and jabbed the air with my middle finger to punctuate my cautionary shout: “Slow down you fuckin’ wanker!” No sooner were the words out of my mouth and fading into the cold morning air, the car downshifted and angled toward the shoulder of the road. There was no way the driver of the smart, 2-seater sports car could have heard me, still I was convinced that I was soon to be roadkill of the human variety. As if the driver could hear what I was thinking, the car slowly began backing down the shoulder of the road towards me. “Fuck it I thought. Let ‘em come. I’m cold. I’m tired. I’m walking to Newcastle. And I don’t need speeding maniacs running me down in the middle of bloody nowhere.” The blue MG coupe’s tires crunched the gravel as the car rolled backwards. The only other sound was my own footsteps in the gravel and cows mooing softly in the fields on either side of the road. The car stopped and the driver reached across the passenger’s seat to roll down the window. The car rode so low, I practically had to kneel beside it to see the driver addressing me. He wore aviator sun glasses and his haircut and wardrobe immediately smacked of military.

“Where are you headed?” he asked.

“Newcastle, I’ve got a train to catch,” I answered, while I scanned the front seat for a tire iron or a chain saw.

OK, I thought, this is it. You’ve spent the past four weeks hitching around Ireland and Scotland without a single problem, you’ve survived Christmas in Killarney and New Year’s Eve in Edinburgh, and you managed to elude the British Army in Belfast — only to mysteriously disappear forever on the road to Newcastle with a backpack full of dirty laundry, a junky Kodak camera, and a soon-to-expire Student Inter-Rail Card. I took one last look at the lolling cows as if to say “OK boys, when the cops come sniffing along asking questions, you have to tell them what happened here today. They looked at me blankly with their big cow eyes and mouths full of grass.  “Cop? Do you mean constable? Bobby? What’s a cop?” I got in. Closed the door. And the car was back in 5th gear in a few short seconds.

“Tough place to get a lift,” my driver grinned. “You’re lucky I came along. Not many people come down this way anymore.”

“Yeah, I was starting to get that feeling.”

“Well I remember being in your shoes one time — in almost exactly the same spot — and I think it took me two days to catch a ride. So I vowed that if I ever saw anybody hitch hiking out on this road I’d pick them up.”

In the end it turned out the driver was an RAF pilot who drove like he flew. I made it to the train station with time to spare and got back to Exeter just in time for the start of the second semester.

There’s something to be said for reckless abandon, youthful enthusiasm, and the DIY attitude. The View’s music exemplifies all three. “Same Jeans” comes from a kick-ass debut --Hats Off to the Buskers— that makes picking one song very tricky and almost unfair. There’s a lot of heart here along with humor, energy, and originality.  It’s all good. But that’s just one person’s humble opinion.﻿ (Please use the comments box to share your thoughts.)