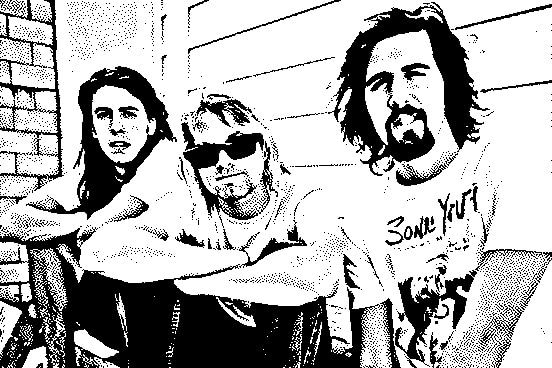 Nirvana
There's really only one way to complete this week of “teen songs…” C'mon, you know where I'm going with this. You must…

I think I saw Nirvana before I ever heard their music. I saw the video for “Smells Like Teen Spirit” on MTV and it scared me. Seriously. It's an unforgettable video shot in lurid yellow and brown colors, full of drifting smoke and flailing limbs, slamming bodies and riotous head-banging. There's a cadre of busty cheerleaders with tattoos and anarchist symbols on their tops; gyrating in front of bleachers full of students — but they look strangely perverted, older and more like backwoods strippers than spirited high school cheerleaders with pom poms. The whole thing takes place in a decrepit gymnasium with no apparent entrance or exit. The bucket of pig's blood has fallen from the rafters and all hell has broken loose — but this time nobody flees the chaos; instead they revel in it. Throughout it all the band snarls and stomps its way through one of the biggest teen anthems ever recorded — and a janitor plays air guitar on his mop handle. These images scared me because I knew somewhere they were true. The music scared me because it seemed completely out of control; just barely holding itself together before it completely detonated. It featured distorted guitars and hoarse, screaming voices, and in spite of itself, it was catchy as hell. The longer the song played, the more it felt like something bad was about to happen and there was no way to stop it. By the end of the video, not even the perpetrators of the incendiary noise are safe: sporadic shots throughout the melee give glimpses of kids flying out of the bleachers, and shaking the bars of the railings like animals or inmates in a prison riot. A pair of legs is visible for a few frames amidst the sea of banging heads and then disappears beneath the waves. The crowd surges, uncontainable, and dangerously close to the band. Someone steals a cymbal. Someone steals the guitar. Someone swings from the basketball hoop. A guitar is smashed. By the end it's impossible to tell if the crowd is dancing or stomping someone to death. Where has the band gone? Audience and performer seem to have switched roles or, become one entity. This is not the teenage wasteland from my teen years. This is something more volatile and threatening and… strangely arousing and appealing? Is it some weird vision of teenage hell? Does that make the bald guy with the bucket and mop Satan? “Oh well, whatever, nevermind.”

Here's some interesting trivia about the song and the video… 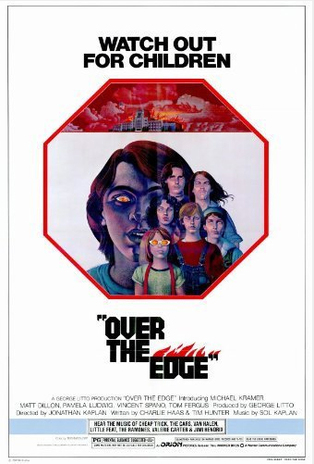 • Kathleen Hana (from the Riot Girl band, Bikini Kill) once wrote “Kurt smells like teen spirit” on one of Cobain's walls. He mistakenly though she was referring to the “teen revolution” people used to write and talk about in Olympia, Washington. So he took it as a compliment. She was actually referring to the deodorant.

• For the music video, Cobain was inspired by the 1979 film Over the Edge about the rebellious adventures of a group of bored teenagers — including Matt Dillon in his acting debut.

• Here's the general script Cobain wanted for the video, but was ultimately nixed by the director because he didn't think MTV would broadcast it. It's a party in a school. Everything was as usual until some young people decided to wreck the area, cars and houses. Then they kidnap the headmaster and hold him in the gymnasium. Finally they burn it. (clearly, this is why there are directors).

Here's a few other disjointed observations about Nirvana, Cobain, and grunge. In my humble opinion, “Nevermind” and “In Utero” would make one brilliant album. Cobain's death was an absolute fucking waste and shame. And like John Lennon and Keith Moon I remember exactly where I was when he was reported dead. If I had been a teenager in the early '90's I would have been drawn to grunge like a moth to the flame and in the same way I was attracted to heavy metal for a time as a teenager in the '70's.
Now here comes the real twist… It didn't seem to make sense for me to send out “Smells Like Teen Spirit” by Nirvana tonight. I'm pretty confidant it's one of those ubiquitous songs that most people already have in their collection — they may not have pulled it out and played it for a long time, but hey, that's not my problem! So instead, I'm gonna include  the video here:
And I'm going to post one of the more interesting cover versions of the song that I own. Today's Happy Medium Song of the Day is Nirvana's “Smells Like Teen Spirit” as performed by The Flying Pickets — not because I necessarily regard it as an improvement over a classic, but because it's a truly unique homage and not just a sloppy send-up. (Please use the comments box to share your thoughts.)