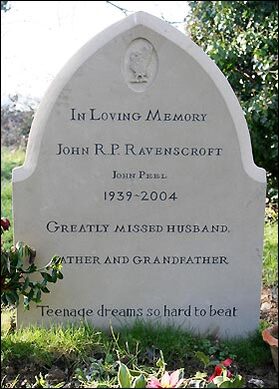 John Peel’s headstone
When legendary BBC Radio guru John Peel died in 2004, he requested "Teenage Kicks" by The Undertones be played at his funeral and these words from that song to be inscribed below his name on his tombstone:
“Teenage dreams, so hard to beat.”

When “the best band from Northern Ireland” known as The Undertones first appeared on the music scene in the late 70's, they were heralded as pop saviours. The five lads from Derry were regarded by many as Ireland's answer to The Ramones. Their songs were all played fast and raw — priceless throwaways with boundless charm — and featured Feargal Sharkey's unique, piercing tenor singing lyrics about teenage concerns like girls, and… obnoxious cousins who were perfect at everything, and… girls, and… candy bars, and… girls… 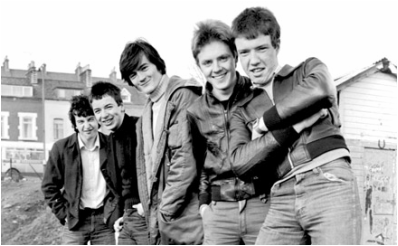 The Undertones
Unlike the Ramones, the Undertones weren't content to stay teenagers forever and that, ironically, was probably their undoing. The growing maturity in evidence on each successive LP—both in terms of song-writing and production—met with greater and greater resistance from the fans who had first championed their arrival. As horns and strings began to augment guitars and drums, (teenage) kicks kept getting harder to find and in 1983 the band broke up.  I stuck with the band all the way and appreciated what they were trying to achieve throughout all their various phases. But I must confess, for a true shot of adolescent adrenaline, nothing beats the two minute pop attacks you'll find on the first, self-titled album. Today's Happy Medium Song of the Day is “Teenage Kicks” by The Undertones.
(Please use the comments box to share your thoughts.)