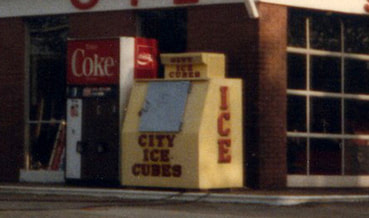 Best turkey fridge ever!
One year at Thanksgiving there was no room in any of our refrigerators to store the mammoth Collins family Thanksgiving turkey. The upstairs refrigerator was full… and so was the downstairs beer fridge. So my father ingeniously decided the best place to keep the big bird on ice was the commercial ice cooler at his gas station. He was so pleased with this idea, we probably would have started storing all our half gallons of ice cream, bags of frozen vegetables and loaves of bread in there too if we didn't need them more frequently than once a year. “Why didn't I think of this before?” he beamed, swinging the large square metal door open with a frosty flourish to show interested (and uninterested) customers his brilliant idea: an enormous Swift Premium Butterball balanced atop a stack of City Ice bags amidst a swirl of chilly freezer smoke. “I should be renting out space to all my friends with oversized turkeys!” he said.
My father's Sohio station was located on Mayfield Road in Lyndhurst, Ohio. Mayfield was the main drag through most of the east Cleveland suburbs and Lyndhurst was situated on it between Mayfield Heights and South Euclid. By and large it was a safe area and a good location for owning a gas station. It was the kind of place where the local police (along with the firemen, the garbage men, dog catcher, etc.) were all friends of my father. (He hated the mayor, but that's another story) Long before cops ever gathered at donut shops, they congregated at Collins Sohio. Sometimes I would approach the gas station on my way to work and the lot would be full of police cruisers with the drivers leaning out their windows talking like teenagers parked side-by-side at a drive-in hamburger stand. At the center of what looked like a keystone cop car pile up would be my father “holding court;” signature oily red rag hanging out of the back pocket of his dark blue work pants, jangling coin changer on his hip, and a smile on his face. “Got room in the jail for one more?” he'd say to them as I approached. They'd all laugh at the joke—no matter how many times they'd heard it before—as I ducked into the gas station looking for an oily red rag to tuck into the back pocket of my jeans… 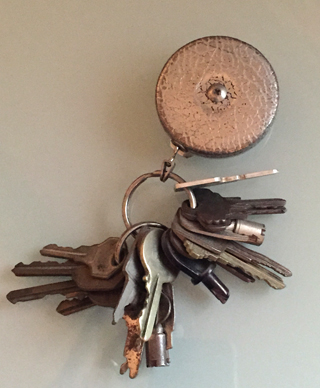 The keys to the Kingdom.
I was on good terms with the Lyndhurst PD too — but for different reasons. When I was a senior in high school, I'd often get stuck working the 6-11 shift on Friday or Saturday night. I'm sure my dad thought this was a good way of keeping me out of trouble. However, my friends all knew my schedule (it was confirmed in the school halls and locker room every Friday afternoon), so typically I had a steady stream of visitors looking for a safe, inconspicuous place to hang out and drink beer. I say “inconspicuous,” unless your a cop driving by at midnight, supposedly an hour after closing, and the lights are blazing away inside and the windows are all fogged up like a parked car on double-date night. Thankfully the Lyndhurst cops must have all remembered what it was like to be young and stupid — not to mention their friendship with my father truly mattered — because their idea of "busting" my friends and I consisted of roaring through the gas station lot with their lights flashing and siren blaring, screeching to a stop at the front door, briefly shining a light at the fogged up windows like a prison searchlight looking for escapees, and peeling out as fast as they'd arrived. That was my cue to pack it in for the night, and to be a little smarter next time — which, of course, I never was. Everyone who worked the late weekend shifts occasionally made a similar mistake — which is why the cops' routine also included just checking to see whether the last person out had bothered to even lock the front door. I can remember the the phone ringing late at night on several occasions and hearing my father stomp and swear as he threw on his work pants and the heavy, retractable key ring that was permanently attached to them, so he could drive up to the station and lock it up long after his last employee had left for the night. And this, believe it or not, leads me right back to Thanksgiving and the Collins turkey innocently chilling in the ice machine.
A few nights before Thanksgiving the Lyndhurst police were making their regular rounds on Mayfield Road when they noticed an unfamiliar van squeal out of the gas station lot and head up the road. It wasn't “hot pursuit,” but they followed. As they tailed the van, they noticed something dripping from it, and even in the days long before global terrorism, an unfamiliar van driving through town dripping an unidentifiable liquid was cause for alarm — or, at the very least, a good opportunity to break up the monotony of policing the sleepy suburb of Lyndhurst on the late night shift. So the cops pulled the van over and discovered the back end was full of 19 melting bags of City Ice and the biggest Swift Premium Butterball turkey they had ever seen. I wish I had been there to see the knowing look on the two officers' faces followed by the conspiratorial nod, but I wasn't. I'm just imagining that's what happened after they handcuffed the driver and radioed a tow truck to come and pick up the van.

When the ragged ring of our upstairs hallway phone woke me up a few hours later, I lay in bed trying to remember if I had done anything really stupid that night… Meanwhile, downstairs, my father had made it to the kitchen phone and I could hear the low mumbles of his conversation — until the part where he bellowed loud enough to wake the entire house and possibly the one next door: “Whatya mean I have to come up to City Hall right now? Can't you keep his ass in jail until the morning?” 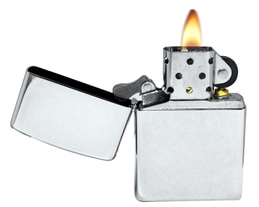 Jail? Shit! Had the cops found one of my friends asleep six feet off the ground on one of the lifts? Had Mike D and his greasy motorcycle buddies finally pissed off the local residents one time too many with a socially unacceptable cocktail of loud heavy metal music, Strohs beer and bottlerockets? I tumbled down the stairs to catch my father before he left and see if I could find out what was going on.

“They need me to come up to the station,” he growled as he snapped his Zippo open at the end of a virgin Lucky Strike.

“The gas station?” I asked.

“No, the goddamned police station!” he barked as the side door slammed shut behind him.

​Now here's where the story gets a little dicey because I didn't accompany Jack to the police station and he was an even bigger embellisher of stories than I am. All we have from this point on is his account of the events…
According to my father, he knew “something was up” from the moment he arrived at the back door of the police station. He pushed the buzzer and one of the younger guy's on the force opened the door to let him in. “He wouldn't answer any questions,” my father said, “it was all very top secret.”

When they reached a room at the end of the hall (which I like to imagine was separated from another room by a one-way mirror — although I have no real reason to believe that the City of Lyndhurst ever had the need for such an elaborately designed interrogation room), my father was handed off to an older friend on the force like a relay baton.

“Jack,” the officer said in his gravest voice, “there's been a robbery.”

I can imagine my father yanking the smoking Lucky Strike from the corner of his mouth and exhaling a cloud of smoke with the same irritated sound he made when my brother once told him that the “E” on the gas gauge of my mother's Camaro stood for “enough.”

“Yeah, how much was stolen?”

“No cash was taken.”

“Nineteen bags of ice were taken out of the freezer in front of the station.”

“Then why didn't you just put them back in the freezer and let me sleep?”

Now if I was directing this scene it would definitely involve a makeshift interrogation room with a one way mirror. The room my father and his police friend step into would be full of the rest of the force working the night shift, all standing around smirking and suppressing the urge to burst out laughing. On the other side of the mirror would be a dramatically lit table. On the table in five separate pools of light would be five different brands of turkey with a number in front of them. “Jack, can you identify which turkey is yours?”

My father would look from the table of turkeys to the serious faces of the men in the room and then back at the table. Then he would take the filterless cigarette stub from his mouth, drop it to the linoleum floor, grind it out with the toe of his heavy, oil-stained work shoe, and just say “Ssssshhhhitttttttt.” Then he'd turn and walk out of the room as it exploded in laughter.

Apart from the dramatic lighting and the one way mirror, that's pretty much how it went down according to my father. Later, the lunch special-of-the-day on the chalkboard at the local bar where everybody went for lunch featured “Collins Sohio Turkey Sandwiches.” Close-up of the chalkboard. “With or without gravy.” Fade to black.