Happy Medium Productions
Rock City Magazine referred to her as “the true Mother of female rock.”

Nationally syndicated columnist Liz Smith wrote recently, “She is so very much more than Daddy’s girl.”

In a Blender Magazine survey of the “50 Sexiest Artists Of All Time”, she hit the list at number 12.

“She is the First Lady of Rock and roll,” according to Rodney Bingenheimer, KROQ DJ 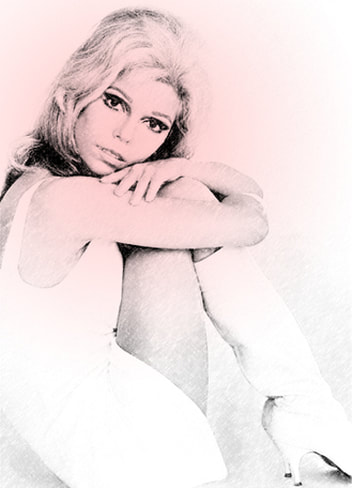 Nancy Sinatra… and her boots.
In 1966 “These Boots are Made For Walking” went to #1 and, according to her official website, “the doors were kicked in for a whole new category of women in music. Nancy Sinatra's tough girl attitude preceded women's liberation and created the first rebel chick singer. The era of the female rocker was born. Armed with a signature style, catchy songs and memorable album covers and photo spreads, Nancy scored more than 24 chart hits in the US and Internationally, and become a role model for young, independent women as well as an icon of pop culture.”

Certainly known more for her 1966 No.1 hit and songs like “How Does That Grab You,” “Some Velvet Morning” (her classic and haunting duet with mentor/producer Lee Hazelwood), and her cover of the Sonny Bono song, “Bang Bang (My Baby Shot Me Down”) — recently revived and remixed for Quentin Tarantino's Kill Bill Soundtrack), Nancy was no stranger to the world of secret agents. She had the honors of recording the title track for the James Bond movie You Only Live Twice, and in 1966—the year before the Bond movie was released—she recorded the title track for the half-hearted comedy spy spoof  The Last of the Secret Agents. The song chugs along with the same underlying rhythm as “These Boots...” and features a wannabe John Barry Orchestra horn section, but somehow Nancy's singing pulls it off. Years later, Scottish punk rockers The Revillos would rip through the song at twice the original speed and release a very catchy version of their own, but it's the original that I'd like to highlight tonight. The Happy Medium Song of the Day is “The Last of the Secret Agents” by Nancy Sinatra. (Please use the comments box to share your thoughts.)