Happy Medium Productions
In the grand scheme of things Mike Scott and The Waterboys never really stood a chance. Despite the fact that they helped define a new sound in British rock n’ roll back in the early ’80’s, there was probably just too much U2 buzzing around for them to garner the kind of commercial success many, including myself, felt they deserved. The “Big Music,” as their wall of sound was dubbed, is a grandiose hybrid of rock, folk, and celtic music featuring horns, keyboards, fiddles, pounding drums, soaring guitars and anthemic lyrics ripe with a spirituality rooted more deeply in philosophy and literature than religion. Phew! (You can see why this band might appeal to me). 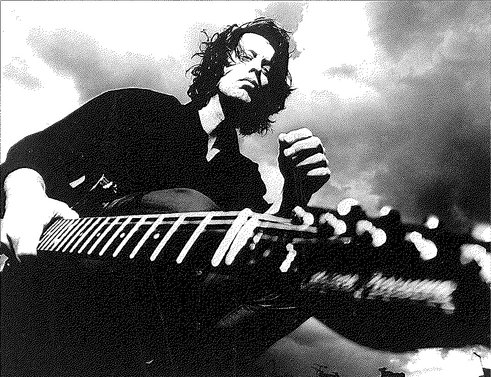 Mike Scott
The first time I saw The Waterboys perform live was at the Bayou in Georgetown. Their show capped off an incredible week of music for me that had featured The Alarm on Monday night, Big Country on Wednesday and The Waterboys on Saturday — with an unknown Irishman named Luka Bloom opening the show! (I also seem to recall that within weeks of that amazing musical trifecta I saw The Proclaimers, Deacon Blue and Hothouse Flowers grace the Bayou stage. At that point, I think if the club had offered to rent me a room, I probably would have considered moving in.) The Waterboys were at the peak of their game that night; riding high on the strength of their third album and the popularity of a song called “The Whole of the Moon.” You might remember it. However, the stand-out song for me, and today’s Happy Medium Song of the Day, is the album’s shimmering and majestic title track: “This Is the Sea.” Whenever I start a “new chapter” in my life, no matter how big or small, this song is the soundtrack I hear playing in the background and it gives me courage and it makes me hopeful.
(Please use the comments box to share your thoughts.)