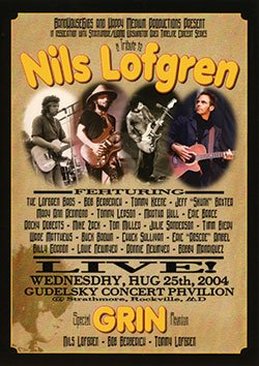 ﻿For the past three years I have been editing a tribute concert to Nils Lofgren. A few weeks ago I received the completed, packaged product. It looks and sounds great. I’m proud, pleased and even relieved with my accomplishment. I’m thrilled to see the Happy Medium logo on an honest-to-god commercial release. Sure, I’d do some things differently if I were given the chance to do it all over again, but for the most part I think the production does a great job capturing the spirit and energy of the event. There are even — dare I say? — some moments of brilliance. The video is a testament to talent, trust, instinct and good luck. I hardly ever found myself without a usable shot — even though none of the camera operators were in communication with each other. Hell, we didn’t even know before the show that the reunion performance by Grin would feature Bob Berberich — the drummer — on lead vocals… until he started to sing!

Usually when you work on a project for so long, you grow to hate it by the time you complete it. I don’t know if authors feel that way when they type the last period, or musicians feel that way when they strum their last chord or painters feel that way when they daub their last stroke, but my experience with long video projects is no matter how interesting the subject might be, half way through most people are already dreaming, plotting or thinking about their next project because they’ve watched the footage so much. They just want to be finished and move on to the next thing. Interestingly, even though I was eager  to finish the edit, I never got sick of the songs. In fact, the exact opposite happened: I began to enjoy them more and more. And now here’s the kicker…truthfully, I’m not even a huge Nils Lofgren fan.

Sure, I know who Nils Lofgren is in the grand scheme of all things rock n’ roll. I’d heard his music before I left Cleveland; owned his early double live LP, Night After Night... wore out a broadcast of his authorized live bootleg from the Record Plant in L.A.... and even got to see him perform live with Bruce Springsteen. But when I moved to Washington, DC, I didn’t share the same guitar-god adoration that most of the locals held for their native son — having seen him grow up and perform live countless times. Folks on the east coast revered Nils and Grin. I simply loved “Moon Tears,” “Keith Don’t Go,” “I Came to Dance,” “Back it Up,” “Cry Tough” and “White Lies.” 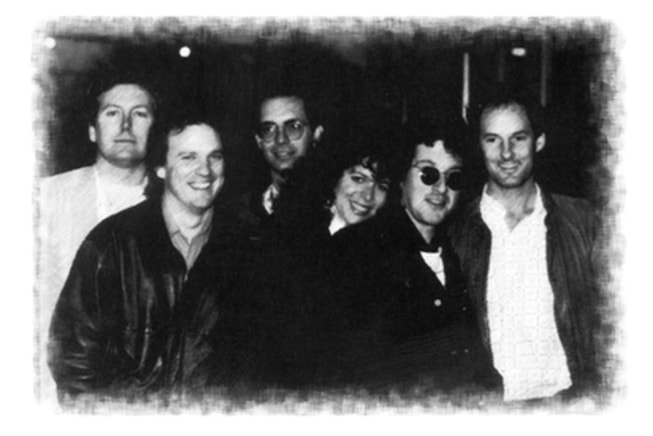 The Newkeys (1988): Spencer Hoopes, Chuck Sullivan, Paul Bell, DianeRosenthal, Tom Lofgren, Ronnie Newmyer
Despite producing his tribute DVD, my real association with Nils is much more indirect and peripheral. Indeed, my connection to Nils, is actually my long-standing friendship with his brother Tom and his best friend Ronnie Newmyer. Over the years I have seen Tom and Ronnie —along with Chuck, Paul and Spencer — perform together and with other musicians under several monikers: The Newkeys, Groovy, and most recently Paper Umbrella. I aborted one video project for The Newkeys (“Permanent Wave”) and successfully completed two others (“Acts of Love” and “Starting Tomorrow”). Lori and I appeared on the cover of their debut album wearing panda suits, and they appeared on the deck in my backyard to perform for my 40th birthday. The high light of my “musical career” came when they invited me to join them “on stage” to play “Wild Thing” and “Like a Rolling Stone” with one of the most undeserved birthday presents I have ever received:  a cherished, black and white Rickenbacker.

Even though I still occasionally resort to introducing them as “Bruce Springsteen’s guitarist’s brother’s band…” the thoughtful, poppy rock n’ roll that The Newkeys recorded — full of hooks, harmonies and homespun eloquence — reaches my head and my heart more directly than anything recorded by Nils. It was a privilege for me to create a DVD of the Nils tribute and Grin reunion, but like that Rickenbacker, my continued friendship and creative collaborations with Ronnie and Tom is something I will cherish forever.

So, the long overdue Happy Medium Song of the Day comes from the first LP by The Newkeys and it’s called “Where I Fit In.” (Please use the comments box to share your thoughts.)