Happy Medium Productions
When I look back at the random mix-tapes and CD’s that I’ve put together over the years, there are a few patterns that emerge. U2 appears on most compilations. Physically squeezing as many songs on to a tape or a disc as possible seems to also be part of the fun. The Ramones and The Buzzcocks can always be counted on for a good song under two minutes to fill out a disc or the side of a tape. A good cover song is never a bad idea for a mix. A typewritten track list is better than nothing. Blocky black and white 8-bit Mac Paint graphics are better than a typewritten track list. Color graphics on glossy paper and printable CD’s look fabulous.

Another thing that stands out is the predictable appearance of one of Lori’s favorite songs whenever she participated in the process of creating a group mix. Now the beauty of a group mix is that no one person has control over where the mix is going. So the final product is always a pleasant surprise. The first person might contribute a punk track, the next person a folk song, the third person might pick up on the folk and go alt country, and the fourth, sensing a trend, lobs a song from the British Invasion into the mix. The result is not chaotic cacophony but more like a tasty musical milkshake that combines all kinds of ingredients that seem unlikely to compliment one another, but after repeated sips proves to be the perfect blend of flavors. 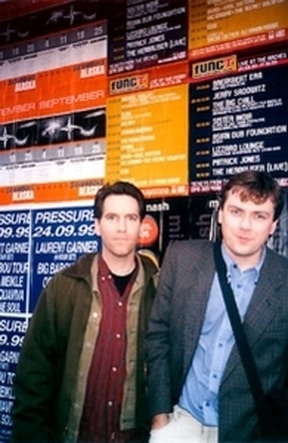 Michael Shelly and Francis Macdonald.
I think Lori realized that the interesting thing about Cheeky Monkey, is that their music goes well with just about everything. That’s because Four Arms to Hold You is undoubtedly one of the most brilliant —and at the same time, unknown—collection of catchy pop songs ever recorded —and not one of the dozen songs is over three and a half minutes. The “band” is American indie recording artist Michael Shelley and the other half, from Scotland, is Francis Macdonald, the drummer/songwriter of the BMX Bandits and Teenage Fanclub. To my knowledge and disappointment, the two have never repeated their amazing collaboration since the release of Four Arms to Hold You back in 1997, and they have never toured together except for “two fun-filled weeks in Spain.”

It’s really no wonder that Lori almost always makes “Chasing Each Other Around the Room” by Cheeky Monkey one of her choices whenever she gets involved with a mix-tape production. And after you hear it, I’m sure you’ll understand why it’s today’s Happy Medium Song of the Day. Thanks Lori.
(Please use the comments box to share your thoughts.)