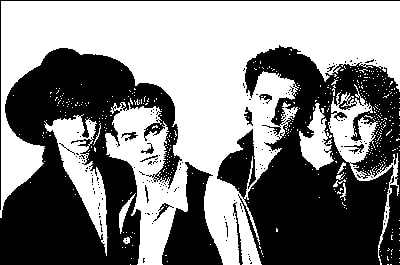 Wire Train
I can’t think of Thanksgiving and not think about the San Francisco band, Wire Train. Twenty-three years ago Background Noise Productions (me and my friends Andy, Steve, Jim and Jimmy) was attempting to produce an alternative/indie music program for college radio and Wire Train was slated to be our pilot interview.  I was scheduled to interview the band the next day before their sold-out show at the 9:30 Club.  In conversations with their record label, 415 Records, I discovered the band had no plans for Thanksgiving dinner, so Lori and I decided to invite them to share ours. They eagerly accepted the invitation, and on a cold and wet Thanksgiving afternoon, the band arrived at our apartment — having just driven all the from Dayton, Ohio in sleeting rain.

While Lori put the finishing touches on dinner, the band sprawled around the living room flipping through my record collection and enjoying a well deserved beer. It was both surreal and completely relaxed and natural all at the same time. You would have thought we were old friends who hadn’t seen each other in years. The eight of us gathered around our tiny kitchen table, and before anyone could raise a fork, the band’s front-man, Kevin Hunter spoke up and said no one could eat until he had said grace. Which he did. After dinner, we played darts on our screened porch and ate Lori’s hot Hershey Kiss cookies straight out of the oven.
The next day we got our interview and the first chance to see the band perform live. They blazed through songs from the first two albums and encored with a killer version of David Bowie’s “Rebel, Rebel.” Wire Train should have been huge, but MCA never accorded them the publicity push they deserved and needed. They released five albums between 1984 and 1992 before calling it quits and becoming Sheryl Crow's accomplished band throughout most of her successful heyday. Adding salt to the wounds, MCA is apparently sitting on two albums-worth of material after rejecting both as being “too weird” to release.

Wire Train's earlier music is definitely a “product of the 80’s,” But I still find it as vibrant and catchy as the day I first heard it. I remember being asked to review their first album for the American University newspaper. I couldn’t find a single bad song. Which makes tonight’s pick very difficult. Nevertheless, kicking off a week’s worth of Wire Train… the Happy Medium Song of the Day is “I Forget It All (When I See You)” from the Wire Train debut, in a chamber...”
(Please use the comments box to share your thoughts.)